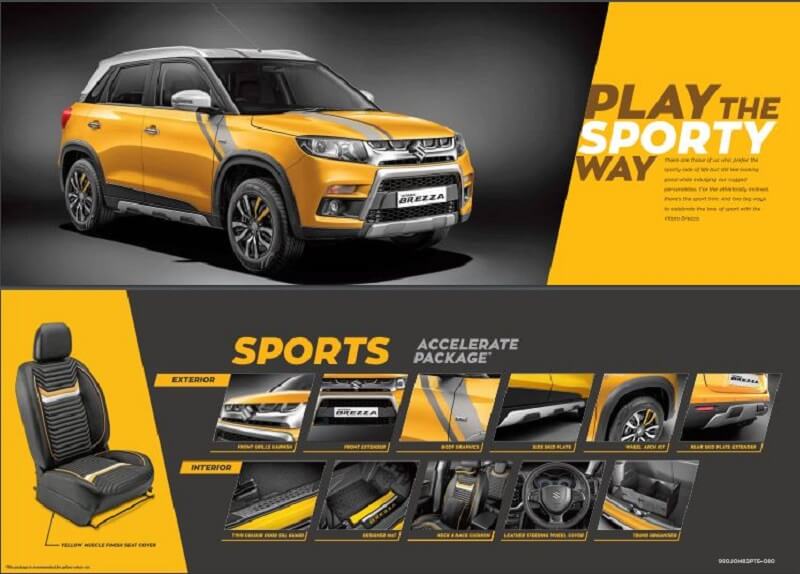 These packages will get the SUV a garnished grille, ORVM and fog lamp, along with the body graphics, side and skid plates and accents on the alloy wheels. Inside, the car will have permutations such as exclusive floor mats, leather steering wheel, PU seat covers and door sill guards. The rear-seat entertainment is offered only with the Glamour packages. Read More About – Maruti Virata Brezza Diesel Automatic

As of now, the ‘iCreate’ scheme is made available only on the Vitara Brezza. But, the company will also be introduced it on its other models as well. One can get the new customization packages at the Maruti Suzuki dealerships across the country. The Indo-Japanese carmaker claims that an average customer spends nearly Rs 24,000 to accessorize the Vitara Brezza over its on-road price. The ‘iCreate’ scheme comes an opportunity for customers to personalize their car as per their tastes and preferences.

The Maruti Vitara Brezza has had phenomenal sales record ever since its launch in India. The compact SUV not only breached 50,000 sales mark, but has helped carmaker achieve highest ever monthly sales in September (2016) as well. Maruti also plans to launch the petrol version of the car by early next year. Also Read – Upcoming Maruti Suzuki Cars in India