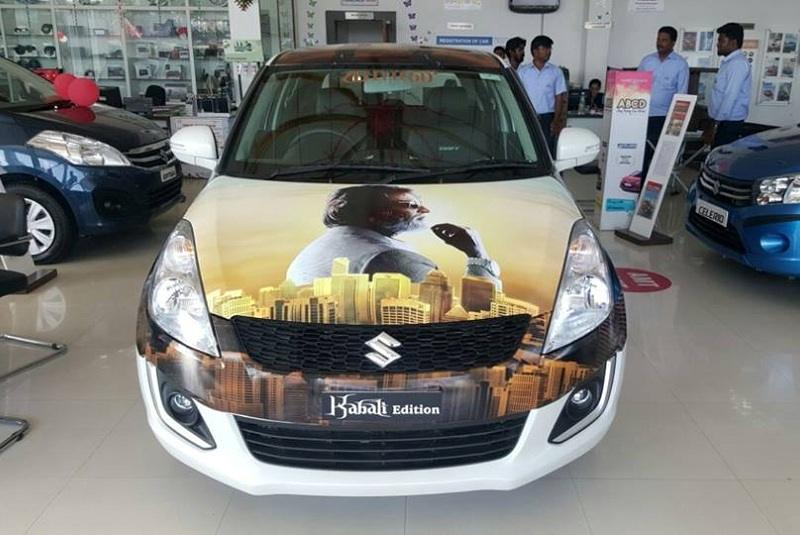 Since the Maruti Swift ‘Kabali edition’ has been designed by a Hosur, Tamil Nadu based dealership and not by Maruti Suzuki India, it will not be on sale in other parts of the country.

Rajinikanth is unquestionably one of the biggest superstars of the Indian Film Industry, and we have heard enough stories about his fans going that extra mile to ensure that their favourite star’s film do well at the box office. While Rajinikanth is busy promoting his upcoming film – Kabali – in each way possible, a Maruti Suzuki dealer in Hosur, Tamil Nadu – Sri Amman Cars – has designed a special edition Swift ahead of the film’s release. A smart move, we must say!

Named the Maruti Swift Kabali edition, the car’s side profile, roof and rear have graphics of Rajnikanth in Kabali get-up. Save for the new exterior graphics, there is no change in the car as it continue to feature the same 1.2-litre K-Series petrol and 1.3-litre DDiS 190 diesel units. The Maruti Swift Kabali edition’s cabin too remains similar to the regular models. With the kind of fan following Rajinikanth in all parts of Tamil Nadu, this smart move can surely bring more buyers to the dealership.

Set to release on June 22, Kabali is one of the most anticipated movies of recent times. The film’s teaser has already become the most viewed Indian film trailer of all time with over 25 million views to date. Interestingly, the Kabali teaser was viewed over 5 million times within 22 hours of its release on YouTube. And that’s why every business house, small or big, wants to be associated with the star.

Written and directed by Pa. Ranjith, Rajinikanth will play the role of a gangster in the film. Set to launch on July 22, the film is originally a Tamil film but its dubbed Hindi, Telugu and Malayalam versions will also be released.

Just so you know, there’s no official association between Maruti Suzuki and the film’s producer for developing such a special edition. The Swift Kabali edition has been designed solely by Sri Amman cars.