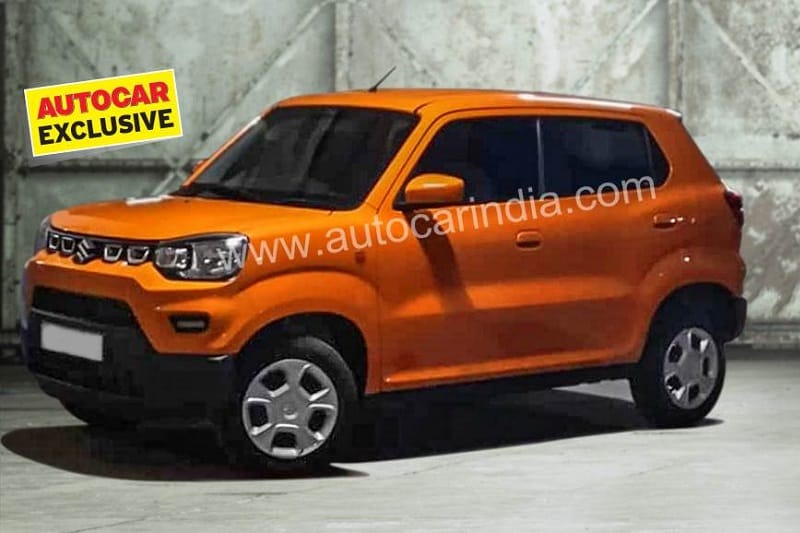 The first clear picture of Maruti Suzuki S-Presso has emerged on the web. Slated to launch on 30th September 2019, the mini SUV from the Indo-Japanese carmaker will gun up straight against the Mahindra KUV100 and the upcoming Tata H2X.

Prices of the S-Presso are likely to start from Rs 5 lakh (ex-showroom). It will be retailed via Maruti Suzuki Arena dealerships.

Most of its design bits will be carried over from the Maruti Future S concept. It has squarish front end with features such as slim grille with angular chrome elements, halogen headlamps, LED DRLs, black bumper and a high bonnet line. The side body cladding, pronounced wheel arches, a blacked out B-pillar, muscular haunches and black rear bumper add more to its sporty look.

The Maruti Suzuki S-Presso also gets the full covers for steel wheels, front fenders mounted turn indicators and flap-type door handle. Compared to the Renault Kwid, the new mini SUV from Maruti Suzuki is 114mm shorter and 59mm narrower. Though, it’s 86mm taller than the Kwid.

The overall length, width and height of the S-Presso stand at 3565mm, 1520mm and 1564mm respectively. Interior of the Maruti Suzuki S-Presso is still mystery to us. Though, it’s likely to get dark grey interior theme and its concept similar dashboard.

Under the hood, the Maruti Suzuki S-Presso might house a BS6-ready 1.0L, 3-cylinder K10B petrol engine with a 5-speed manual and an AMT gearbox option. In its BS4-compliant form, the gasoline unit makes 68bhp and 90Nm of torque.