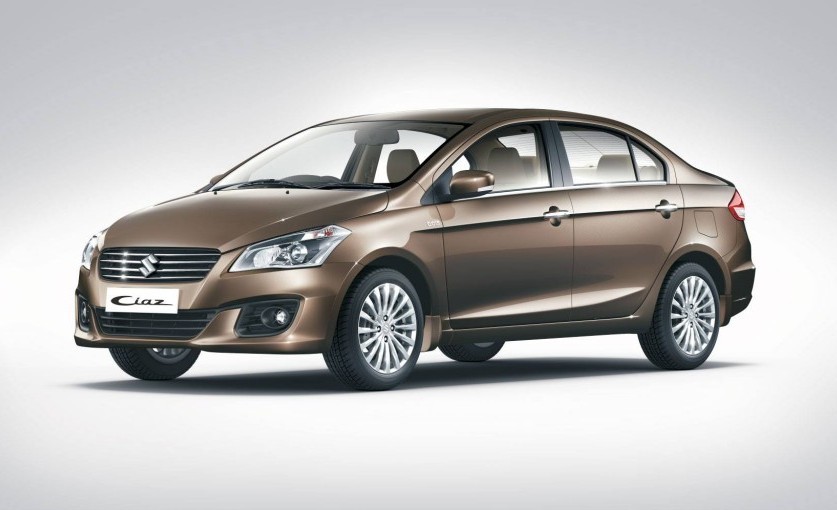 We were the first one to inform you that Maruti will launch the Ciaz compact sedan in the first week of October. And now, our sources revealed that the company will launch the much-awaited Ciaz mid-sized saloon in the Indian car market on October 5, 2014. The bookings for the saloon have already commenced at a token amount of Rs. 21,000. First unveiled at the 2014 Delhi Motor Show as concept, the Ciaz will come as a replacement for the aging SX4 sedan.

The Maruti Suzuki Ciaz features an elegant front fascia with trapezoidal chrome grille complemented by larger angular shaped projector headlamps. The bumper has wide air dam and a pair of fog lamps. The side profile has simple lines that run across the length. The rear profile of the Ciaz resembles the City sedan with taillights and air scoops integrated into the bumper.

The Maruti Ciaz measures 4490mm in length, 1730mm in width and 1,485mm in height, and it comes with a large wheelbase of 2650mm. The top-of-the line variant is equipped with 16-inch alloy wheels. Inside the cabin, the Ciaz feels more upmarket than other Maruti’s. The fit & finish and material quality is pretty decent, while the dual-tone interior scheme suits Indian buyers taste. It is equipped with an advanced infotainment system comprises of touch screen unit, radio, USB/AUX and SD-Card, and Bluetooth interface, in-built navigation system and others.

Under the bonnet is the same 91bhp, 1.4-litre K10B petrol and 1.3-litre Fiat sourced MJD motor producing 89bhp. Both the engines have been tuned to offer better drivability and high fuel economy. The Suzuki Ciaz is claimed to be the most fuel efficient car in the country. The oil burner returns an impressive mileage of 26.21kmpl, while the gasoline version delivers 20.73kmpl of fuel economy.