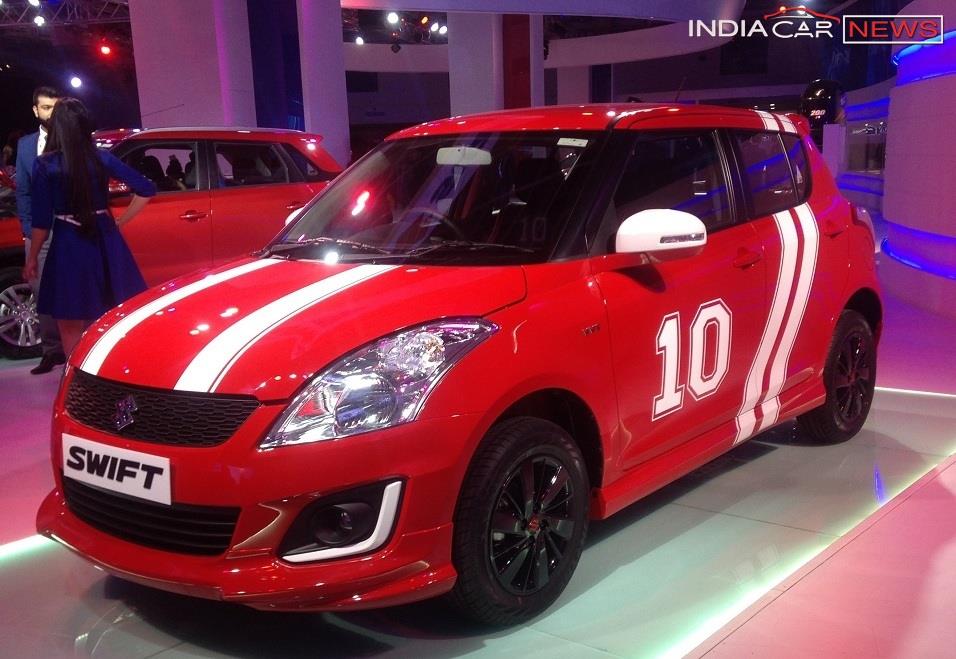 September 19, 2016 – Maruti Suzuki introduced a special edition of its popular Swift hatchback in August, 2016. Called the Maruti Swift Deca, this limited edition model derives its styling cues from the customized swift that was put up on display at the 2016 Auto Expo in February. The Swift Deca is being made available in two variants – VXi and VDi. While the former is priced at Rs 5.94 lakh, the diesel version is tagged at Rs 6.87 lakh (ex-showroom Delhi). Read: Maruti Vitara Brezza Review – A Good Value For Money Car

Speaking on the launch of the Swift Deca limited edition, Mr R S Kalsi, Executive Director, Marketing and Sales, Maruti Suzuki said, “Swift is a sporty, stylish and fun to drive car. Since its launch, it has been one of the best performers in our portfolio and helped us strengthen leadership in premium hatchback segment. Over the years, the Swift has evolved in features, looks and technology, often defining the changes in aspiration and preferences of Indian car customers. Swift Deca carries forward the sportiness and performance quotient associated with the brand.”

Compared to the standard Swift VXi (O) and VDi (O), the Deca VXi and VDi are priced at a premium of Rs 22,555 and Rs 30,139. According to the company, the Swift Deca Limited Edition offers benefits of Rs 18,000 on the accessory kit to customers.

Maruti claims that the special edition of Swift is ‘Stylish, Edgy and Sporty’.  This is the same accessorized version of the Swift that the company had showcased at the 2016 Delhi Auto Expo, and which also had the number 10 sticker on it. The showcased Swift’s model was accessorized with white racing stripes, white wing mirror covers, black alloy wheels, number ‘10’ stickers on the hatch lid, front and rear doors, a body kits all around and a rear spoiler. Read More About: Maruti Suzuki Baleno Hatchback | Maruti Suzuki S-Cross Compact SUV

Read: A Complete List of Upcoming Maruti Cars in India

Since it is a limited edition, there are no mechanical changes made to the car. The Maruti Swift limited edition continues to source its power from the 1.2-litre K-Series petrol and 1.3-litre DDiS diesel engines paired to a 5-speed manual transmission. The petrol mill is good enough for 83.11bhp and 115Nm of torque, while the diesel mill generates 74bhp and 190Nm.