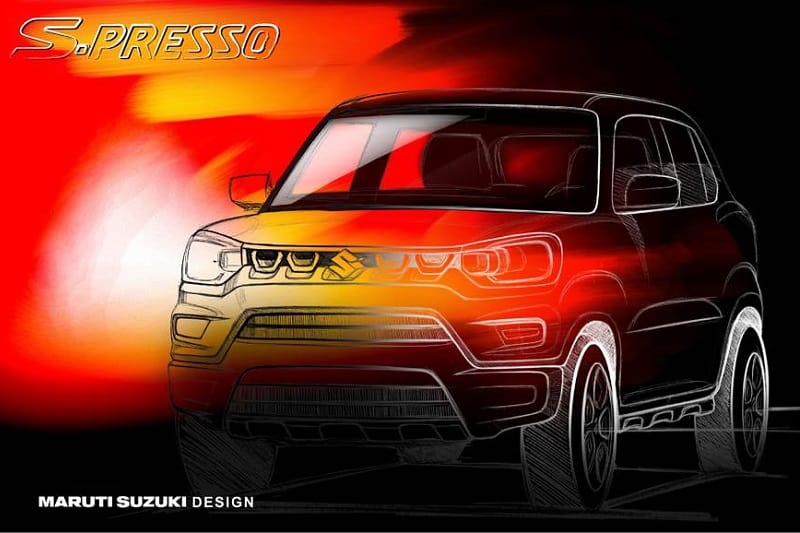 Maruti Suzuki today released the first teaser picture of its upcoming S-Presso mini SUV.  Set to launch this festive season, the Maruti S-Presso is said to be “built on Maruti Suzuki’s Arena philosophies of advanced technology and new age designs”. The carmaker says that its name is inspried from the ‘Espresso’ coffee representing the “strong, robust and bold characteristics” of the vehicle.

The new mini SUV from Indo-Japanese carmaker features upright stance similar to the Future S concept that broke cover at the 2018 Auto Expo. Design elements such as a squared-off front fascia with headlamps merging into the grille and a high bonnet line are carried over from the concept. The angular chrome elements in the grille look similar to the Vitara Brezza.  Read – Maruti S-Presso Will Heavier Than Renault Kwid

Maruti S-Presso is built on the Heartect platform and measures 3665mm in length, 1520mm in width and 1549mm in height. This makes it the lightest and smallest vehicle from the carmaker. It has a wheelbase of 2380mm. Read – Maruti May Launch Diesel Cars In Future

At the engine front, the Maruti S-Presso will get the BS6-compliant 1.0L K10B petrol engine that’s good for 68bhp and 90Nm of torque. In its BS4 version, this gasoline unit delivers fuel economy of 23.95kmpl. With the BS6 upgrade, the mileage figure of the engine is likely to drop significantly. The mini SUV carline will include 6 manual and 3 AMT variants.