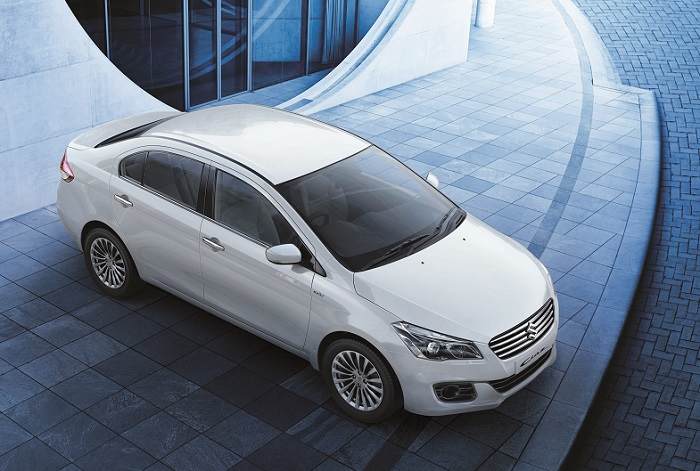 Boasted with the SHVS (Smart Hybrid Vehicle by Suzuki) mild-hybrid technology, the Maruti Ciaz Hybrid is claimed to return a fuel economy of 28.09kmpl. This makes it India’s most fuel efficient car, followed by the Celerio Diesel and Dzire Diesel. The sedan is also equipped with smart hybrid features such as Idle engine start/ stop system, power assist and brake energy regeneration. Available in 5 variants, the Maruti Ciaz Hybrid has been introduced as a replacement of the diesel version of the sedan. Powering the Maruti Ciaz SHVS Hybrid is a 1.3-litre DDiS Multijet diesel engine with SVHS technology that comprises an integrated starter generator (ISG) and a high capacity battery. Unveiled at the 2015 Geneva Motor Show, this technology enhances fuel efficiency of the vehicle. This engine puts out a  maximum power of 88.5bhp at 4,000rpm and 200Nm at 1,750rpm. Transmitting power to the wheels is a 5-speed manual transmission that is coupled with 2WD (two-wheel drive) system. The sedan is capable to accelerate 0-100kmph in 13.2 seconds.

The Maruti Suzuki Ciaz Hybrid is made available in 5 variants – VDi, VDi (O), VDi+, ZDi and ZDi+. Safety features like ABS (Anti-Lock Braking System) and a co-driver airbag with the driver side airbag are also on offer. Since the Ciaz Hybrid hasn’t received any cosmetic update, it looks identical to the old diesel models. Though, the SHVS badges mark a difference between both the variants. The SHVS technology with assistance of brake energy regeneration system converts wheels’ kinetic energy into electricity via an integrated starter generator. The electricity with an idle start-stop system helps the engine to produce extra torque whenever needed. Furthermore, it automatically switches-off the car while stopping at a traffic light that helps the car offer a better fuel economy. The Ciaz SHVS Hybrid also features Blue Technology that reduces harmful emissions from engine, making it a more environment-friendly product.