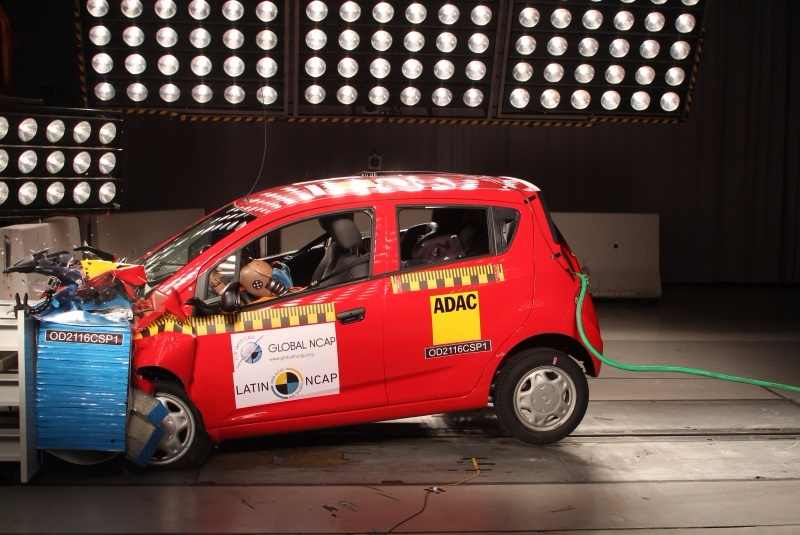 The reason behind such a poor performance is due to the unavailability of airbags as the structure remained stable in the frontal crash test.

In the recently concluded Latin NCAP crash test, the made-in-India Chevrolet Beat aka Spark GT has scored zero rating in both child and adult occupant protection. The reason behind such a poor performance is due to the unavailability of airbags as the structure remained stable in the frontal crash test. The agency didn’t perform the side impact test as the car failed the frontal crash test.

In the test, it was found out that the Child Restrain System was installed forward facing by the company instead of keeping it rearward facing as much as possible. This means that the Chevrolet Spark GT aka Beat misses out on recommend instructions for Child Restrain system. On contrary, the European model of the vehicle, Spark, has six airbags and had received 4 star rating in Euro NCAP test. The Latin American model of the hatchback is exported from the company Talegaon, Maharashtra based facility.

Alejandro Furas, Latin NCAP Secretary General said: “This is another disappointment from General Motors, especially in a model that has the potential to offer high protection levels, as it did when its basic version equipped with 6 airbags was tested by Euro NCAP in 2009 and scored four stars. It is unacceptable that the European version of the Spark GT, which included airbags, is offered at a similar price to the Latin American version, which has no airbags.”

With all these results, the safety of made-in-India cars still remain under question. But with stricter vehicle safety norms coming into effect from October 2017, we hope to see much safer cars for India in future.