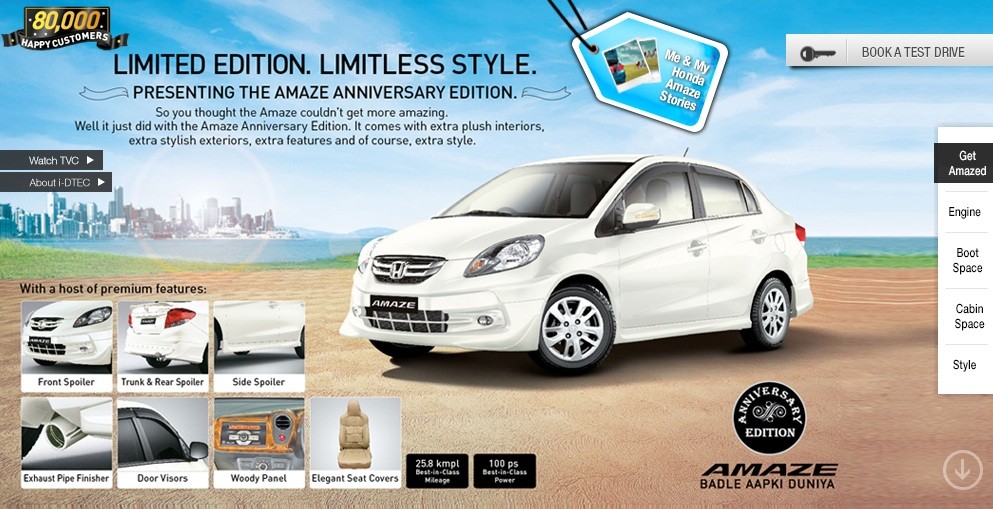 Honda Cars India has introduced the ‘Anniversary Edition’ of its compact sedan Honda Amaze to mark the 1st Anniversary of the car in the Indian car market. The special edition will be available in ‘VX’ and ‘S’ trims in both petrol and diesel.

Announcing the ‘Anniversary edition’, Mr. Jnaneswar Sen, Senior Vice President, Marketing & Sales, Honda Cars India Ltd said, “Honda Amaze has been a game changer in its segment and has enabled HCIL to reach out to so many new customers, bringing them into the Honda fold. We are delighted to introduce the new ‘Anniversary edition’ amongst customers to celebrate its success. It is Honda’s constant endeavor to provide freshness to our products and create excitement in the market. We are confident that the differentiated and youthful look of the car will have greater appeal to our customers.”

The features on offer with the ‘Anniversary Edition’ includes

Wooden finish panel on the dashboard.

The car also gets an ‘Anniversary Edition’ moniker to highlight the special edition. This special edition will be available at a special price of Rs. 71,861 over the price of standard ‘VX’ and ‘S’ variants. While the petrol version of the sedan gets the tried and trusted 1.2-litre i-VTEC engine, the oil burner is propelled by the 1.5-litre i-DTEC diesel engine.