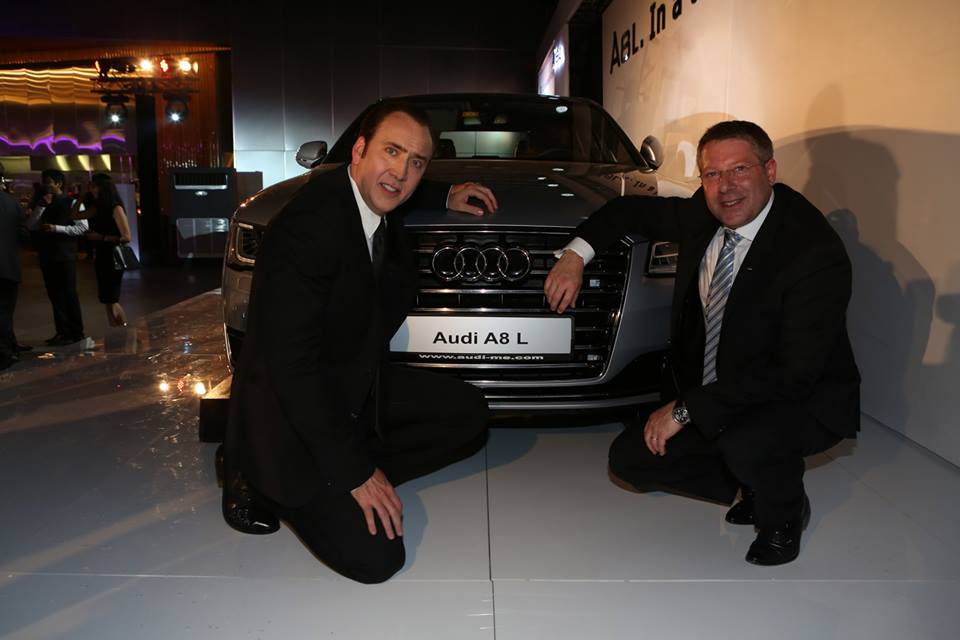 German luxury car manufacturer, Audi has silently launched the facelifted A8 L luxury saloon in the Indian car market. The updated A8 L was first unveiled at the 2013 Frankfurt Motor Show and was displayed at the 2014 Delhi Motor Show. The Audi A8L facelift is priced at Rs. 1.12 crore .

The Audi A8L facelift now features more aggressive hood with prominent creases visually flows and merges the A-pillar. It gets restyled grille which now sports seven horizontal slats instead of eight, while the newly formulated front bumper adds to it sporty character.

The rear profile of the updated Audi A8 L gets newly designed tail lamp assembly, while the bottom of the rear bumper accommodates the sporty dual exhaust. Its flared wheel arches have been fitted to a new range of alloy wheels.

The Audi A8 L facelift features new Matrix-Beam LED headlamps which is the most noticeable change given to this sedan. This headlamp is equipped with 25 high beam LEDs which gets operational when the headlights are in automatic model with the high beam on. This headlamp work in co-ordination with the on-board camera; when the camera detects an oncoming vehicle it reacts quickly by diming the LEDs focused on the vehicle but it continuously offering the lights to rest areas around the dimmed section. The front and rear turn indicators of the sedan automatically lights up depending upon the direction it moves.

The updated Audi A8 L is offered with 2 diesel and single petrol engine. The 3.0-litre TDI engine develops 246bhp of power and 580Nm of torque. It accelerates to 100kmph from rest in just 6.2 seconds. The other diesel motor is 4.2-litre TDI that develops 385bhp and 850Nm of torque. It sprints from 0 to 100kmph in just 4.6 seconds. The gasoline model gets the 4.0-litre TFSI quattro that is capable of developing 414bhp of power and 600Nm of torque. This model accelerates to 100kmph from zero in mere 4.6 seconds. Both engines come paired to an 8-speed automatic transmission.

The Audi A8 L is now available in 100 exterior shades, 23 interior colours and 12 options for wood inserts.