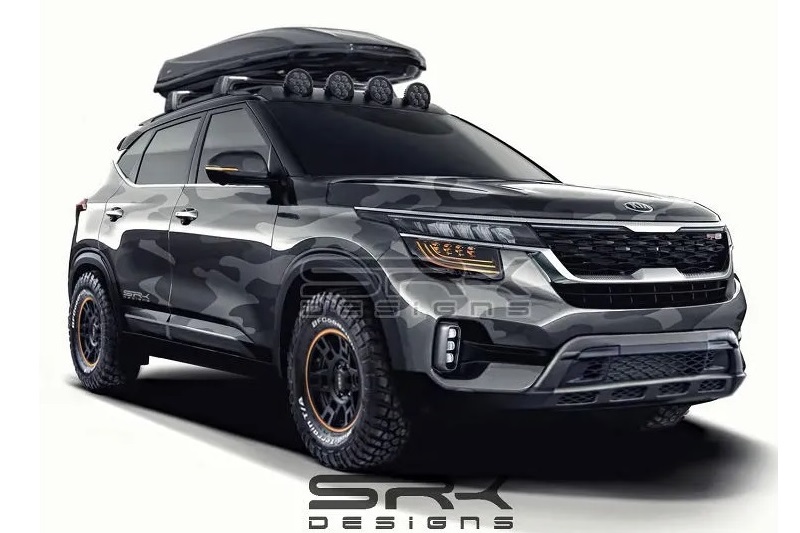 Kia Seltos is surely one of the much-awaited launches of this year. The 5-seater SUV is reported to go on sale on 22nd August, though the official launch date is yet to be announced. Kia’s first SUV for India will come with multiple engine and transmission options along with a feature-packed interior. We have already seen the SUV at its global premier, but what we haven’t seen is the off-road version of the SUV. SRK Designs recently took the original pictures of the Kia Seltos and made a render of what they think could be an inspiration for its off-road capable model.

Painted in a new camo colour scheme, the Kia Seltos off-roader gets a revised chin with slightly modified lower bumper. What further enhance its rugged appeal are the four LED auxiliary lights fitted on the roof and large tyres with new blacked out rims. The vehicle also features black cladding all around the body. Read – Top 10 Features of Kia Seltos SUV

From the very first day of its arrival, the Kia Seltos will be made available with BS6-compliant engines. There will be two petrol (115bhp, 1.5L Smartstream and 140bhp, 1.4L) and one diesel (115bhp, 1.5L CRDi) powertrain along with four gearboxes – a 6-speed manual, a 6-speed torque convertor, a CVT and a 7-speed dual-clutch automatic.