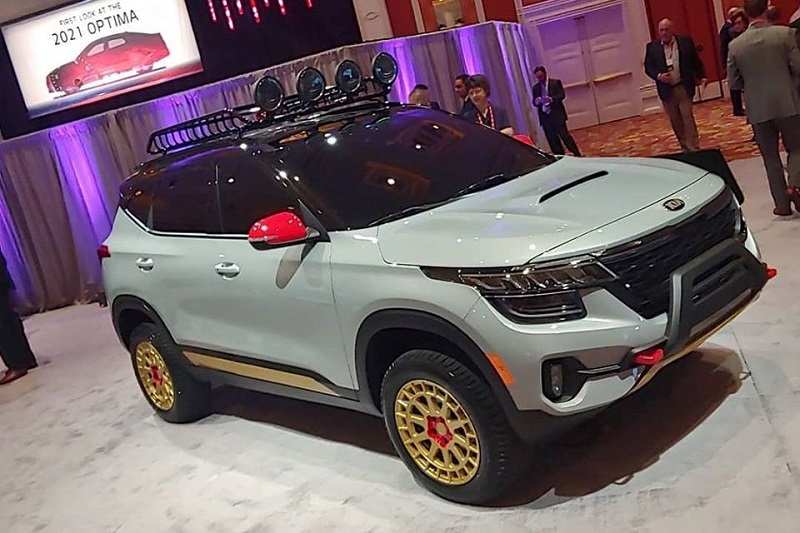 Kia Seltos has been doing really very well for the Korean carmaker in India. Now, the compact SUV is ready to enter the US market and ahead of its official launch the vehicle was showcased at a dealership event. Alongside the regular model, Kia American unveiled the two modified off-road version of the Seltos. Read – Kia Seltos Waiting Period Reaches Up To 4 Months In Select Cities

One of the off-road modifications is based on the entry-level trim that misses out on the LED headlamps and DRLs. The model is painted in off-white shade along with orange accents on the ORVMs, side skirts, front and rear bumper and orange roof.

Upfront, the Kia Seltos modified off-road version features a new black grille with matte black finish, blacked out headlamps and a hood scoop. There are four auxiliary lamps on the roof integrated on the roof carrier. Compared to regular model, the modified version has higher ground clearance. Features such as off-road tyres, suspensions with more travel and a winch enhance its off-road performance. Read – Kia to Launch 6 New Cars in India

The second Kia Seltos modified off-road version features smaller off-road bumper and LED headlamps with LED DRLs at the front end. The golden colour accents on the front and rear bumpers, wheels and side skirts add more to its rugged off-road looks.

Other highlights include red front and rear tow hooks, additional protection on the front bumper, scoop in the bonnet, four headlights on the roof. Both modified Kia Seltos features a 1.4L turbocharged petrol engine with a 7-speed DCT gearbox and 4WD (four-wheel-drive) system.