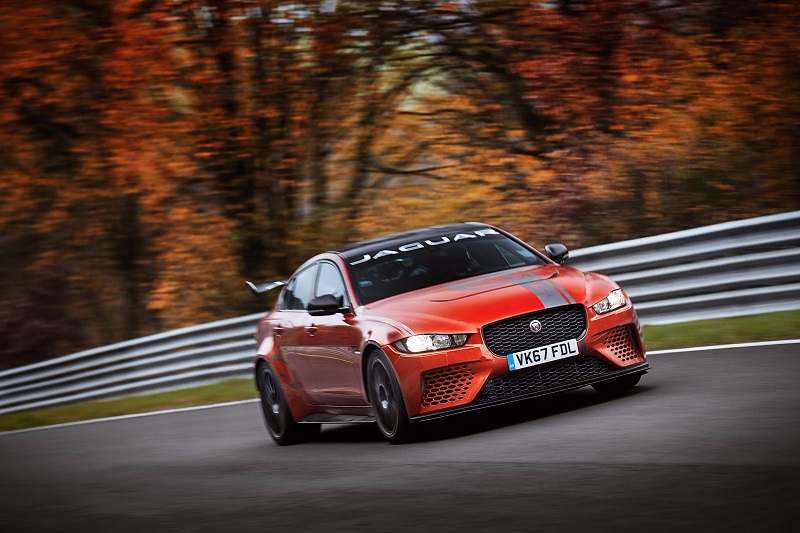 Jaguar XE SV Project 8 accelerates to 97kmph from zero in 3.3 seconds and attains a top speed of 322kmph

Jaguar’s SVO-developed XE SV Project 8 is officially the fastest four-door car in the world. The car completed a lap of the Nurburging in flat 7 minutes and 21.23 seconds, toppling the previous fastest sedan around the 20.7 km German circuit. Interestingly, the 441 kW Project 8 is even faster than some of the world’s fastest two-door coupes and supercars. That said, the road-legal Jaguar is designed, engineered and hand-assembled by SVO to hit 0-97km/h within 3.3 seconds while attaining a top speed of 322km/h. The fastest four-door production sedan in the world is restricted to a limited run of 300 units globally. It will be retailed at £149,995 in the UK market. Also Read – Jaguar E-Pace Small SUV Officially Revealed

The SVO design and engineering team’s mission was not just to create the most track-focused road-legal Jaguar in history but also to build the most agile product so far, said Mark Stanton, Director SVO. To achieve this, only the roof and front door skins of Project 8’s body have been retained from XE, whereas copious changes are made to the mechanical hardware (around 75%), he further mentioned. Adding to it, he also said that this astonishing Nürburgring Nordschleife record validates the success of such extensive changes. Also Read – Prices of New Jaguar F-Type SVR Convertible & Coupe Announced

John Edwards, Jaguar Land Rover Special Operations Managing Director, added that SVO aims at pushing the boundaries of performance, luxury and all-terrain capability. The hand-assembled XE SV Project 8 takes that principle to the limit, extracting supercar-beating performance from Jaguar’s most compact four-door sedan. He further mentioned that the Nürburgring Nordschleife record underlines company’s commitment to deliver the most extreme Jaguar ever to Project 8 clients, who will soon experience this sensational sedan for themselves.