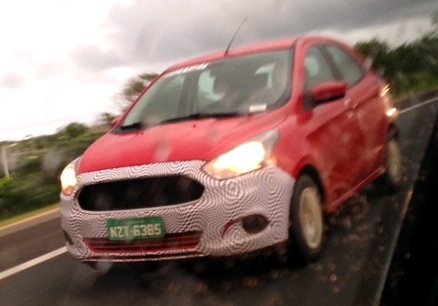 American automaker Ford unveiled the new generation Figo aka Ka Concept in the Brazilian market last year. The production version of the hatchback was spotted testing on the Brazilian streets. Spotted model wear minimal camouflage, indicating a near launch. The same model will also come to India by 2015 as a replacement for the current model.

Codenamed as the ‘B562’, the Ford Figo was spotted quite a few times before its unveiling. It is expected that Ford is doing final testing runs before making some subtle changes to the car. The spotted vehicle shows that the vehicle retains most of the styling cues from the concept shown. It comes equipped with the Aston-Martin like grille, which will be seen on all upcoming Ford cars. The headlamps and tail lights are directly lifted from concept, however the vehicle do not have LEDs.

Under the hood, the diesel version of the new Figo is likely to get the same 1.4-litre TDCI engine, while the petrol variant is expected to get the 1.0-litre 3-cylinder EcoBoost engine. For Indian market, the company might ditch the turbocharger engine and would go with the current 1.2-litre petrol engine.

The new generation Ford Figo will first launch in Brazil before coming to India. Ford India will first launch the Figo based compact sedan which was showcased at the 2014 Auto Expo as concept. The company will also launch the new Fiesta facelift in the Indian car market.