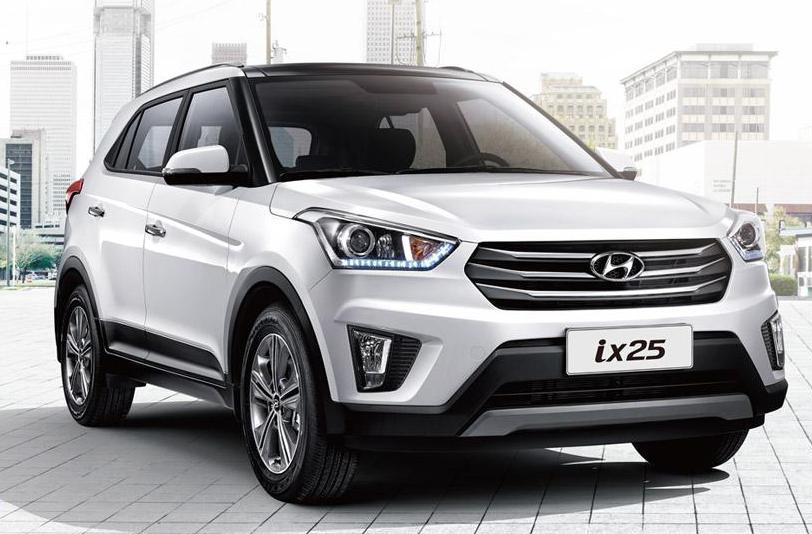 Seeing the growing demand for compact SUVs, Hyundai- the South Korean automaker decided to enter into the compact SUVs or crossover segment of the country. After launching the i20 Active crossover, the Korean automaker is now ready to launch the much-awaited Hyundai ix25 compact SUV in India. This SUV has already been launched in the Chinese market, which has been spotted testing on Indian roads.

The ix25 is not a sub-4 metre SUV, measuring 4270mm in length, 1780mm in width and 1622mm in height, and it has a large wheelbase of 2590mm. Based on Hyundai’s Fluidic Design Sculpture 2.0, the ix25 looks like a smaller version of the Santa Fe SUV. The overall profile resembles the larger sibling, but there are several changes to offer fresh appeal. It features a new bumper, big silver skid plate, newly styled grille and stylish fog lamps. The chrome grille is flanked by newly designed headlamps with silver inserts and LED daytime running lamps.

The side profile looks identical to the Santa Fe, and features forward leaning stance with flared wheel arches for squad stance. The muscular wheel arches have been fitted to 17inch alloy wheels. At the back, the SUV gets newly styled tail lamps, new roof mounted spoiler and silver skid plate. The liscencing plate is positioned on the lower end of hatch door.

Inside the cabin, the SUV looks identical to the India-spec Verna sedan. The overall layout is similar to the sedan, with lots of component sharing to keep cost down. It will get beige interiors that suits Indian buyers taste. The SUV is equipped with several features include touchscreen infotainment system, automatic climate control, power steering and windows, electrically adjustable outside rear view mirrors, rear AC vents, etc.

The vehicle offers a large 400-litre boot space, which is more than sufficient to accommodate four suitcases. It will be a five-seater SUV, with top-end model feature leather seats.