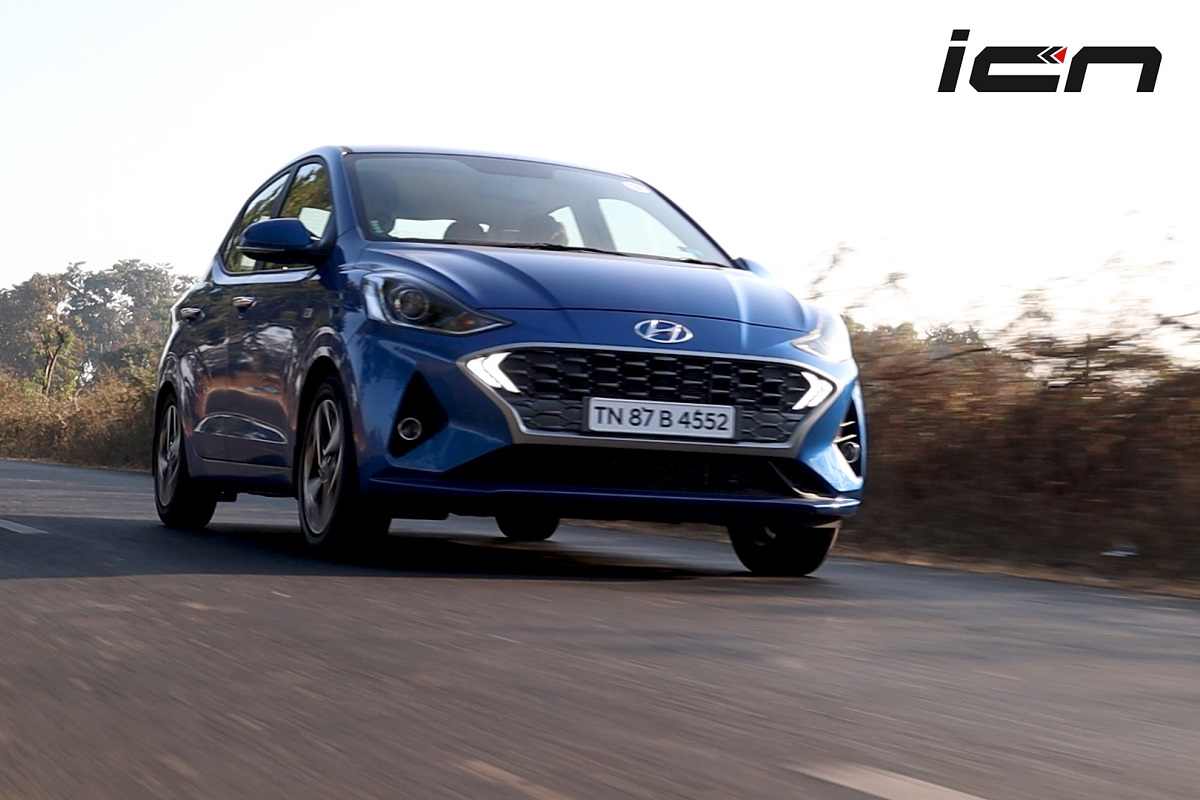 We drove the newly launched Hyundai Aura sub-4 meter sedan on the roads of India’s cleanest and magnificent city – Indore. The Aura is the successor of the Xcent sub-4 meter sedan, which was launched in 2014. Similar to the Xcent (based on the Grand i10 hatch), the Hyundai Aura is based on the new Grand i10 Nios hatch. With Aura, Hyundai is aiming to mark its strong presence in the subcompact sedan segment dominated by the Maruti Suzuki Dzire.

For people not in the know, the Hyundai Aura is available in 3 engine options – a 1.2-litre, 4-cylinder naturally aspirated petrol, a 1.0-litre, 3-cylinder turbocharged petrol and a 1.2-litre diesel. I only got to drive the diesel version of the sedan that too, with an AMT (Automated Manual Gearbox). So, here is a quick Hyundai Aura diesel Review that should answer most of your questions about the latest entrant in the sub-4 meter sedan segment –

Designing a sub-4 meter compact sedan is always a tough job, and it is quite evident with the way Xcent and now the Aura looks. The Aura looks nice, but in bits and pieces. Well, sedan’s rear profile is quite exciting; however, it doesn’t gels well with the overall profile of the sedan.

From the front, it is quite evident that the Aura looks exactly similar to that of the Grand i10 Nios. It gets a large cascading grille, flanked by sleeker projector headlamps and boomerang-shaped DRLs (Daytime Running Lights) at each end gives a distinctive profile. Strong creases can be seen on the bonnet and the sides, which seem identical to the Grand i10. The sedan looks similar to the Grand i10 Nios till B-pillar. Majority of the changes are made to the rear profile. It features the blacked-out C-pillars, which is again overdone and not gone well with the overall design of the sedan. The floating type C-pillar and a coupe-like roofline with sloping roof give it a distinctive profile.

The rear looks sharp, featuring uniquely styled boot-lid and Z-shaped tail-lamps. However, I personally feel that the rear profile doesn’t go well with the overall profile of the sedan.

The cabin of the Hyundai Aura is directly sourced from the Grand i10 Nios. In fact, the features and design elements remain intact; except for the differently textured seats. It features a clean and clutter free dashboard in dual-tone scheme. The centre console is dominated by a large 8-inch touchscreen infotainment system with Android Auto and Apple CarPlay. There is a piano-black panel that extends from the touchscreen to the instrument console, making it look like a single unit. It has part-digital instrument console with an analogue tachometer, and the 5.3-inch display offers multiple information.

The steering wheel is the same as the Grand i10 Nios, offering telephone and infotainment controls. The overall quality is impressive, and the fit and finish is top-notch. Maintaining the tall-stance, the i10 Nios based sedan offers high-set seats and offers nice visibility all around the cabin. The fabric seats are nicely designed to offer comfortable ride to front occupants.

The rear seat impresses me the most, as the backrest is reclined nicely and offers good support to back. The seat offers excellent thigh-support, which means long distance travel won’t be an issue. Due to sloping roofline, the sedan’s headroom feels inadequate for a tall person. The large windows offer plenty of light and make the interior feel spacious. However, the rear bench seat is good to accommodate 2 adults with 1 child. The rear-end also gets air-con vents, adjustable neck restraints and a 12V charging socket. The Hyundai Aura also has plenty of storage spaces including well-sized glovebox, cupholders and space for a large smartphone in front of the gear console. It also gets segment-first wireless charging option. It comes with 402-litres of boot, which is more than sufficient to accommodate weekend bags.

The Hyundai Aura’s 8.0-inch touchscreen unit is easy to use. There are buttons on either side of the screen, with buttons feel top-notch in fit and finish. It features Arkamys sound system, which is decent. The sedan is loaded with several high-end features like rear-view camera, alloys, projector headlamps, fog lamps, electrically adjustable ORVMs, air purifier, wireless charging, etc.

Sadly, I only got to test drive the diesel version of the sedan that too with an AMT gearbox. It features the same 1.2-litre, 3-cylinder diesel engine, which is compliant with BSVI emission norms. This engine is capable of producing 74bhp of power at 4,000rpm and 190Nm of torque at 1,500rpm. Transmission choices include a 5-speed manual and a 5-speed AMT unit.

There’s diesel clatter at idle, but the clatter reduces on the move. The overall refinement is clearly the best in its category including the Dzire and the Amaze. Even on higher speeds, this engine is smooth with negligible engine noise. This engine is good for city rides offering ample bottom-end and mid-range; however, there is lag initially and you need quick shifts.

We drove the AMT version, which is the same transmission unit offered with the petrol AMT model. While this AMT unit works nicely with the petrol model, the AMT unit with diesel engine feels sluggish and jerky. There is significant pause between shifts, and takes own time to go down or up depending on the use of brakes or speed of the car. With slightly relaxed foot, the diesel AMT works fine and offers good fuel economy. However, the diesel AMT version of the Aura disappointed me when it comes to performance.

Similar to the Nios, the Aura features a conventional suspension setup of independent MacPherson struts with coil springs at the front and a non-independent torsion beam setup at the rear. The suspension feels firm, but it does well to tackle regular undulations and bumps at slow speeds. However, on slightly higher speeds you can easily feel the jerk or bump. Bump absorption is not great in the AMT version, but it is common with most of the Hyundai diesels in India. At higher speeds, the diesel Aura feels planted and composed.

Similar to the Grand i10 Nios, the Aura’s steering is light with limited feedback. However, the steering weighs up decently on higher speeds. This is not an engaging car to drive, and is more a family car with higher fuel efficiency and comfort for daily commute.

Failed with Xcent, Hyundai’s another stint with Aura in the compact sedan segment could bring success. Going by the appearance, the sedan looks disproportionate; however, there are smart design elements that could appeal to young audience. The diesel engine is refined, but the performance of the car is not up to the mark. The Hyundai Aura is a user friendly car, thanks to its light steering, feature-loaded cabin and comfortable seats.