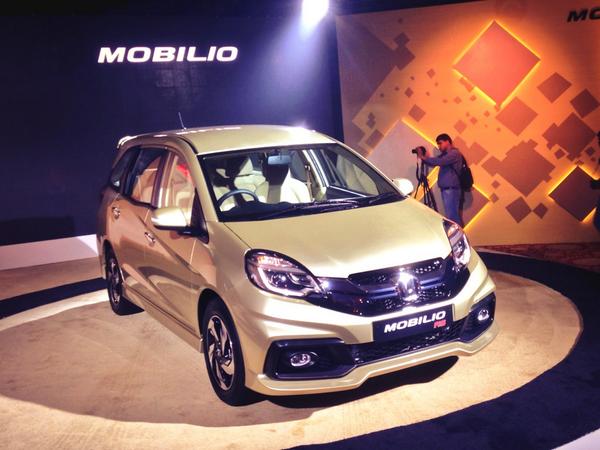 Honda Car India has finally launched the much-awaited Mobilio compact MPV in the country. Available in three trim levels- E, S and V, the Honda Mobilio MPV has been priced at Rs. 6.49 lakh (ex-showroom, New Delhi). The sportier Mobilio RS will be made available in diesel version only, and will go on sale in September. Unveiled at the 2014 Indian Auto Expo, the Mobilio MPV will directly rival against the likes of Maruti Suzuki Ertiga, Chevrolet Enjoy and Toyota Innova.

Based on the versatile Honda Brio’s platform, the Mobilio is a three-row, seven-seat MPV and is claimed to be the most spacious multipurpose vehicle in its league. The company has given special attention to the third row space which offers enough legroom and headroom for two adults. Honda Mobilio shares its exterior as well interior styling with Amaze compact sedan. Moreover, the interiors are directly sourced from its smaller siblings including dashboard and centre console.

The Honda Mobilio is available in both petrol and diesel guise. The gasoline version of the MPV is powered by the 1.5-litre i-VTEC engine that is capable of developing a top power output of 117bhp and a peak torque of 145PS. Its oil burner has 1.5-litre i-DTEC engine that produces 98.6bhp of power and 200Nm of torque. Both the engines are paired to a five-speed manual transmission gearbox which sends the power to front wheels of the compact MPV.

Claimed to be the most fuel efficient MPV in its league, the Honda Mobilio diesel returns an ARAI certified fuel economy of 24.2kmp , while the petrol version delivers an impressive mileage of 17.3kmpl. Dimensionally, the Honda Mobilio is 4386mm in length, 1680mm in width and 1610mm in height, and a large wheelbase of 2650mm. The vehicle has a large ground clearance of 189mm which makes easier to drive it through rugged Indian roads.

The Honda Mobilio is basically a budget MPV, and it share most of its styling cues with Honda Amaze compact sedan which means a very competitive pricing. The front features thick horizontal slat grille with chrome accents and the bumper features wide airdam and oval shaped fog lamps. Its hood gets two prominent lines, while the fog lamps has black plastic casing. The chrome grille is flanked by large headlamps which are directly lifted from Amaze. The side profile gets aerodynamic creases running across the length while the flared wheel arches have been fitted to 15-inch wheels. At the back, the vehicle gets a new set of tail lights and a wraparound look of the windscreen.

Based on Honda’s “Man Maximum Machine Minimum”, Honda Mobilo has dual tone interior scheme with beige being the predominant colour. The material quality and fit & finish are top notch. Interior components including steering wheel, switches, music system and air conditioner are directly sourced from the Amaze. The second row seats can slide back to offer more comfortable seating, while the third row-seats can be fully foldable than can easily accommodate 2-3 suitcases. It also has roof mounted air con vents for second row passengers.

For passengers’ safety and security, the Honda Mobilio has several advanced safety and security including ABS (anti-lock braking system) with EBD (Electronic Brake-Force Distribution), airbags, central locking, engine immobilizer and others. The ABS and EBD comes as standard safety features in diesel variants; however, the top-spec petrol models only get these features.