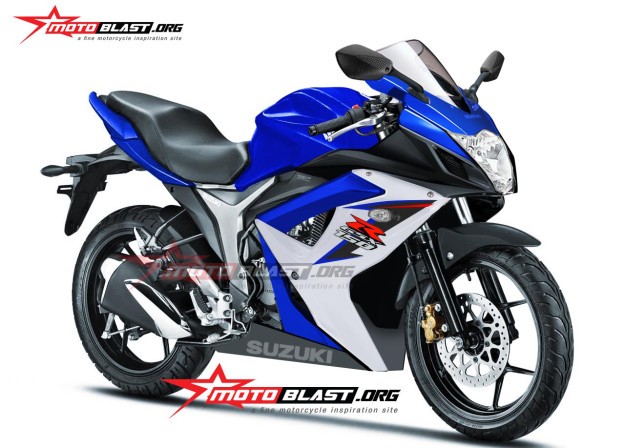 We reported earlier that Suzuki will launch the fully-faired version of the Gixxer in the country. The motorcycle has recently been spotted testing on Indian roads, which is likely to go on sale in mid-2015. It shares most of its features like fuel tank, exhaust pipe, tail end, alloy wheels and braking system with the Gixxer. The bike is equipped with a shield-shaped headlamp, which is the company’s signature design for its sport bikes range. Folks at Motoblast have released a rendered image of the upcoming bike. Christened as the Suzuki GSX-R 150, the fully-faired bike largely resembles the larger siblings- the Suzuki GSX-R 750 and the GSX-R 1000. It will be powered by a 154.9cc engine that also powers the Gixxer. This engine churns out a maximum power output of 14.8PS and a peak torque of 14Nm. It is coupled to a five-speed gearbox.

The rendered image of the fully faired Gixxer 155 shows a pretty decent looking bike, which is good enough to attract buyers. The vehicle will be priced higher than the Gixxer, around Rs. 90,000. It will compete against other fully-faired motorcycles such as the Honda CBR150R and the Yamaha Fazer F1 V2.0.