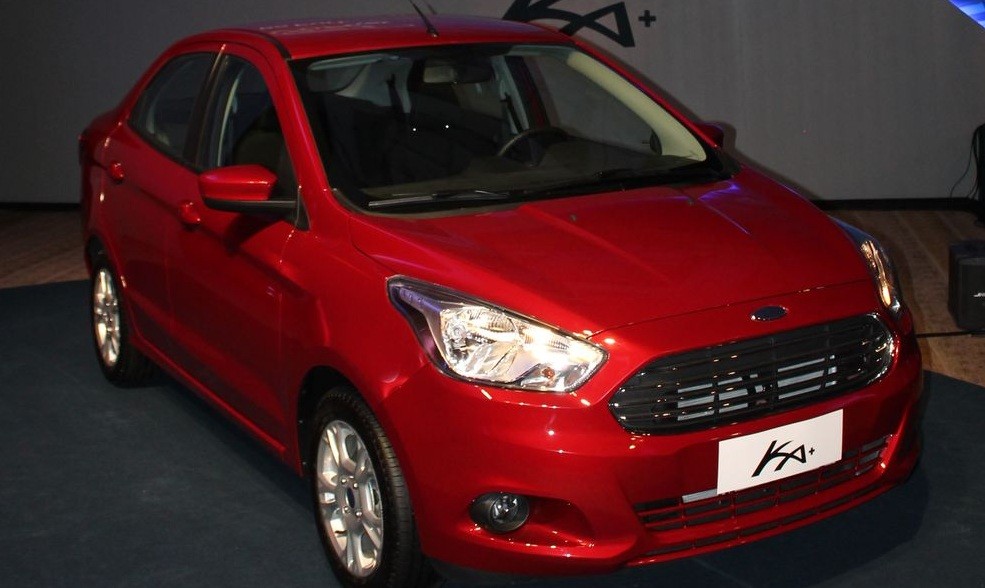 Ford has recently launched the 2015 Ka hatchback aka Figo in the Brazilian market. The company has also unveiled the Ka+ (New Figo sedan) at the same event. The Figo sedan concept was first unveiled at the 2014 Indian Auto Expo, which will go on sale in the country by early next year. The front fascia of the new Ford Ka+ sedan features single parabola headlights which looks dynamic and more modern. It is equipped with Aston Martin-like grille with chrome inserts which offers the common family look. This model gets rounded shaped fog lamps and a wide air dam. The trunk area is little prominent and short in length. The trunk can be easily accessed and the internal space is also good. Its flared wheel arches have been fitted to 15-inch alloy wheels covered by 195/55 R15 tyre. The side profile features two prominent creases running across the length, which further enhances the overall dynamics of the car. The sedan model looks identical to the concept shown; however, the aerodynamic curves and creases are slightly modified to make it road compatible.

Inside the cabin, the fit and finish is good and material quality is top notch. The interiors of the Ford Figo sedan are borrowed from the New Fiesta sedan, but it is slightly tweaked. Its centre console gets gloss black finish and is equipped with a digital display in Ice Blue shades with Ford’s SYNC information. The device menu has traction control and assistant starting ramp.

Its SYNC also has functions for CD/MP3 player, Bluetooth, USB, AUX, SMS reader and voice commands. The glossy black finish is also given to the central air con vents. The three-spoke steering in glossy black finish gets adjustable function and the audio and telephony commands are mounted on it. The vehicle gets several small utility spaces such as two cup holders and bottle holders.