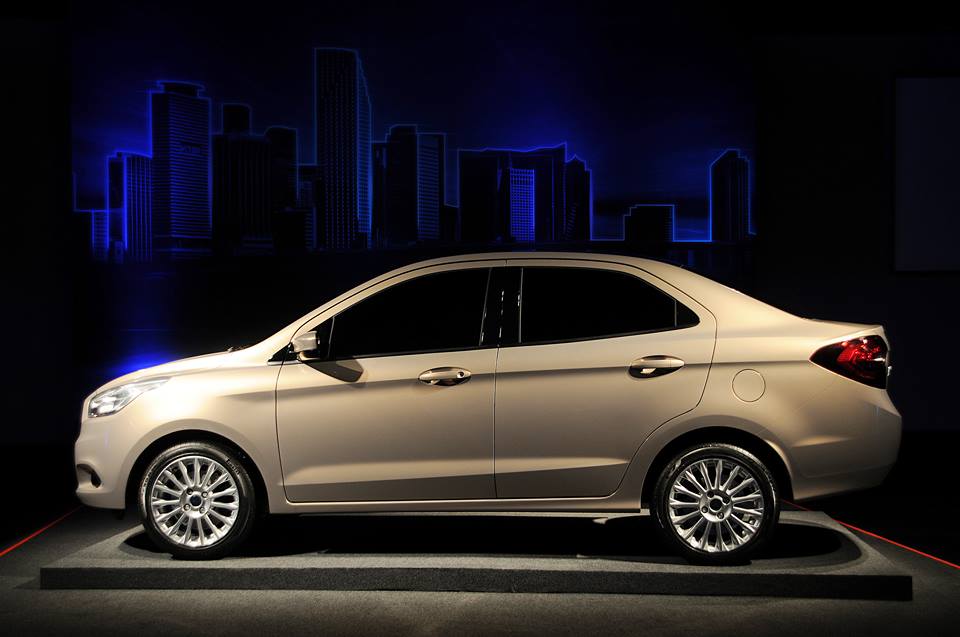 Ford Brazil has again released a new image of the upcoming Figo sedan aka Ka+ via social media. Recently, the company revealed few pictures of the sedan and its sibling hatchback, and this time Ford shows off the side profile of the sedan. However, the Brazilian model will not be a sub-4 metre sedan which is visible in the picture. The Indian model will be a sub-4 metre sedan, so expect a more compact boot.

The Figo sedan will go on sale in the Brasilian market next month, while the India launch will take place by early next year. Like Ford EcoSport, the Figo sedan will first go on sale in Brazil before it travels to other countries. The production spec Ka+ sedan looks identical to the concept shown at the 2014 Indian Auto Expo. In the picture, it is visible that the company has slightly tweaked the aerodynamic creases and curves to make it road compatible.

The flared wheel arches have been fitted to 15-spoke alloy wheels. The door handles and ORVMs are painted in body colour. On closer look, the turn signals are also integrated on the outside rear view mirrors. The sweptback headlamps and smartly designed tail lights are also visible. The Figo sedan is equipped with trapezoidal grille (Aston-Martin like grille), large bumper with wide air dam and a pair of fog lamps.

The Ka+ sedan will be powered by the new three-cylinder 1.0-litre engine that churns out a maximum power output of 85bhp (with ethanol). This engine is claimed to return a fuel economy of 13kmpl in city and 15kmpl on highways. In India, this model will be offered in both petrol and diesel guise.