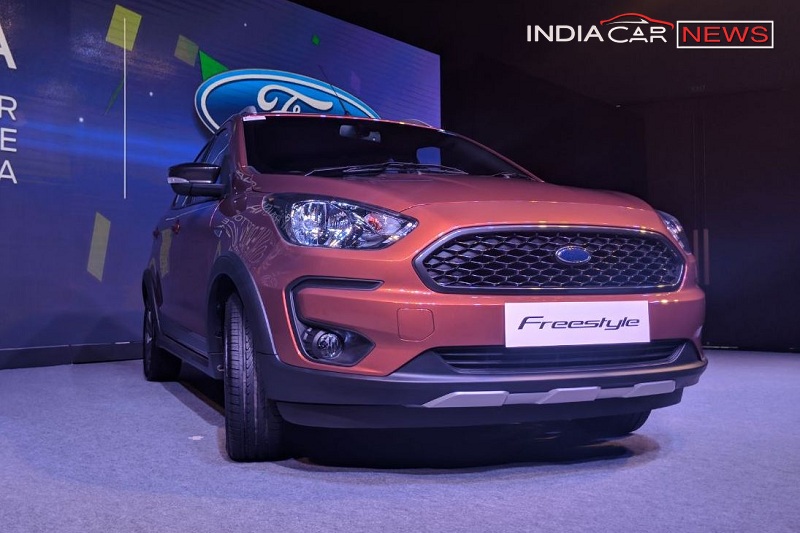 – Priced between Rs 5.09 lakh and 7.89 lakh (ex-Delhi), the Freestyle will take on the Hyundai i20 Active and the Toyota Etios Cross.

This cross-hatch also marks the debut of Ford’s new 1.2-litre 3-cylinder Dragon-series petrol engine that offers segment leading 96bhp of power and 120Nm of torque. The diesel version is powered by the same 100bhp, 1.5-litre TDCi unit. Power is transmitted to the front wheels via a 5-speed manual gearbox. Read – Ford Kuga SUV Might Come To India 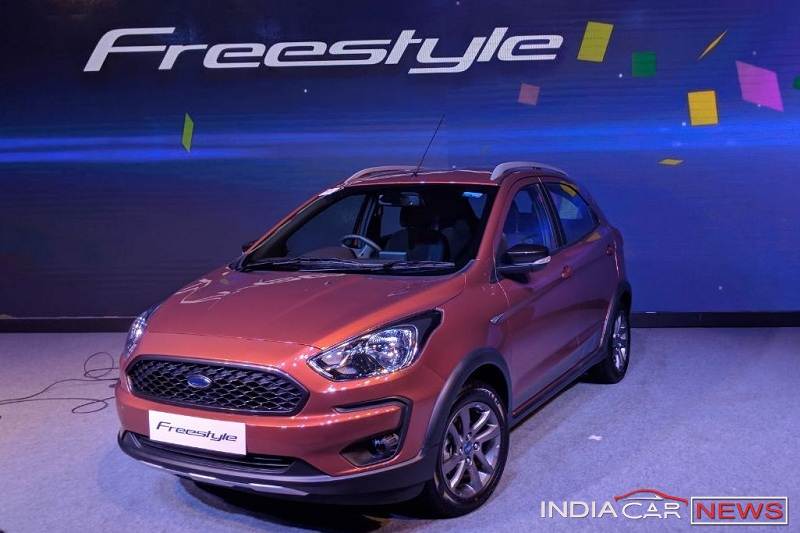 Ford’s new cross-hatchback receives additional body kit and a raft of new (including touchscreen infotainment system as standard) over the regular Figo hatchback. The design and styling of the crossover is inspired by its younger sibling. Though, it looks more masculine and sportier than the latter one. These attributes makes it slightly more expensive than the Figo hatch. The cross-hatch is being offered in four trim levels – Ambiente, Trend, Titanium and Titanium+ – and in total of  8 variants. The Ford Freestyle price in India is Rs 5.09 for base model and Rs 7.89 lakhfor the top-end model. Read – New Ford Endeavour Revealed In New Pictures

Most of the design bits of the Freestyle crossover are carried over from the Figo hatchback. However, it carries more rugged and commanding stance. Styling elements such as additional body cladding, black plastic, roof rails and new Mustang-inspired hexagonal grille give it a crossover-ish appeal. Accentuating the sporty front fascia of the car are the sweptback headlamps, unique grille with three-dimensional mesh, pronounced bonnet, fog lamp bezel and blacked-out high contrast on the front bumper with integrated skid plate and sculpted fascia sections. Read – New Ford Premium Hatchback Under Development 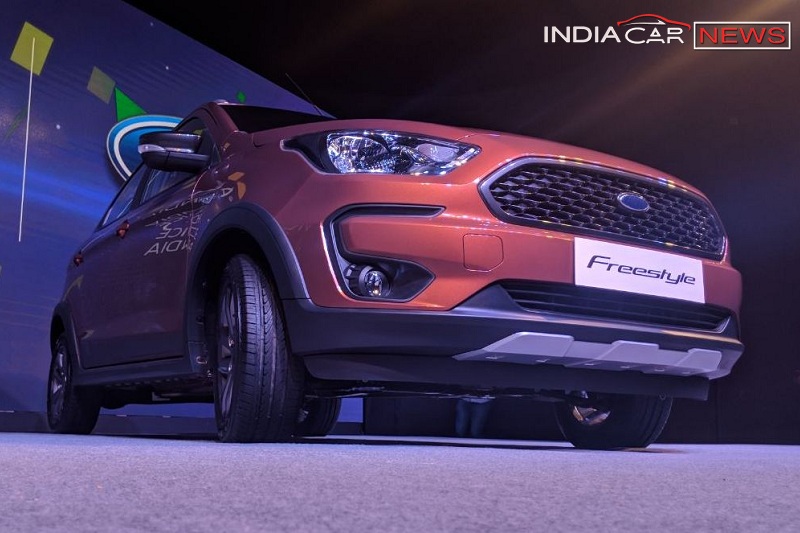 What add more to its sporty look is black plastic cladding is running across the sides and wheel arches. The side profile is further adorned by twin-spoke black alloy wheels and roof rails. Riding the crossover are the large and wider 1185/60 R15 tyres. Ford is also offering a range of accessories with the crossover. The accessory kit includes body stripe kit and roof wrap, rear spoiler, R15 alloy wheels, sun blinds, seat covers and slimline weathershield.

The ground clearance of the new Ford Freestyle is higher than the regular Figo hatchback. It stands on 185mm of ground clearance, which is 15mm higher than its donor sibling. The fuel tank capacity of petrol and diesel models stand at 42-litres and 40-litres respectively. While the petrol version carries kerb weight between 1026-1044kg, the diesel model has a kerb weight of 1062-1080kg. The overall length, width and height of the crossover stand at 3,954mm, 1,737mm and 1,570mm respectively. Sitting on a wheelbase of 2,490mm, the car offers a turning radius of 5.0 meter. It has a boot space capacity of 257-litres. 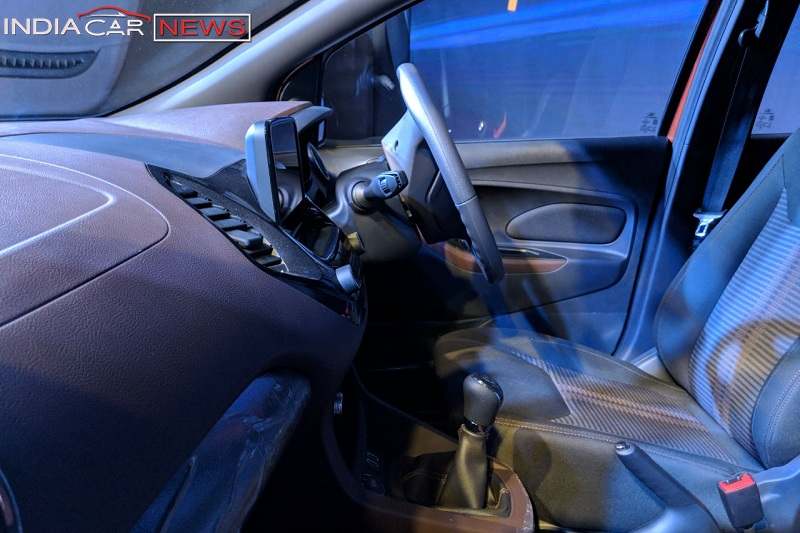 Similar to the exterior, the crossover’s interior design shares resemblance with the Figo hatchback. Though, it’s more feature-loaded and premium than its younger sibling. It gets charcoal black interior with an updated dashboard and a new 6.5-inch floating touchscreen infotainment system that we have already seen on the new EcoSport. The crossover also gets Ford’s SYNC3 in-car infotainment system, which is compatible to Android Auto and Apple CarPlay. Read About – New Ford Aspire Facelift

Ford’s newest compact utility vehicle is being offered with two engine options – 1.2-litre, 3-cylinder, TiVCT petrol and 1.5-litre TDCi diesel. The former one is a Dragon family all-aluminium motor, which is essentially the stripped down version of the 1.5-litre engine that also does duty in the EcoSport compact SUV. This gasoline engine offers class-leading power and torque figures. It is capable of producing a maximum power output of 94bhp at 6,500rpm and a peak torque of 120Nm at 4,350Nm, thus making it more powerful than Honda’s 1.2-litre i-VTEC petrol and Maruti’s 1.2-litre K-Series petrol engines. Check Out – India’s Top 5 Best Modified Ford EcoSport

On the other hand, the oil burner is capable of producing 100bhp of maximum power at 3,750rpm and 215Nm of peak torque between 1,750rpm-3000rpm. This cross-hatchback comes with a new 5-speed manual gearbox, which is claimed to be lighter, more precise and responsive than the existing Figo hatchback. Its suspension mechanism includes independent McPherson front and semi-independent (twist beam type) rear unit. 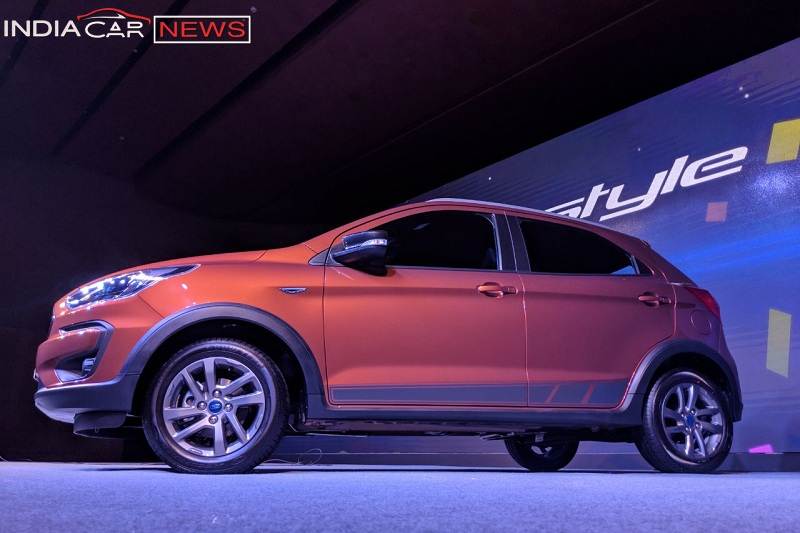 Similar to its hatch sibling, the cross-hatch is high on fuel efficiency. As per the company’s claim, the Freestyle petrol returns an ARAI-certified mileage of 19.0kmpl and the diesel version delivers 24.4kmpl. Read – New 2018 Ford Mustang Arrives in India

In the cross-hatch segment, the aggressive looking Freestyle will face challenge from the Toyota Etios Cross, Hyundai i20 Active and Fiat Urban Cross. It will also take on the Honda WR-V and Mahindra KUV100 NXT.

Ford Freestyle is one of the finest cross-hatchbacks currently on sale in India. While the engine performance is best-in-league, the interior lacks premium feel offered by its closest rival Hyundai i20 Active.