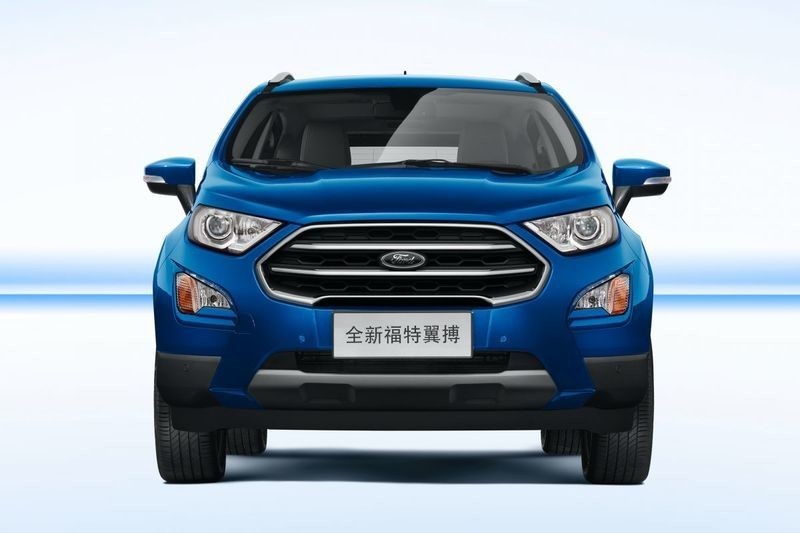 Ford, the American automaker will officially launch the new Ford EcoSport 2018 model in the Indian car market on November 9, 2017. Dealers have already started taking pre-orders for the compact SUV, while the deliveries are being promised from the second week of November. The new EcoSport packs raft of features and gets several updates, both on the inside as well as the outside. With these changes, the new model will take on the likes of Maruti Vitara Brezza and the newly launched Tata Nexon.

Talking about changes, the Ford EcoSport 2018 gets an all-new front fascia that is in-line with new breed of Ford cars. It is equipped with a new trapezoidal grille, new headlights with integrated daytime running lamps and re-profiled bumper. The side profile looks largely identical to the existing model, except for the new set of alloy wheels. At the back, the SUV gets revised taillights, new bumper and a new cover for the spare wheel. Read – Tata Nexon Vs Ford EcoSport

The cabin too has been revised to give it a refreshing look, makes it look quite contemporary. The most notable change offered inside the cabin is a new 8-inch touchscreen touchscreen infotainment system, which is compatible with Android Auto and Apple CarPlay. Other design changes include the new steering wheel, instrument console and dashboard layout. Material quality has also been improved. It is also likely to get cruise control, a rear-view camera, a speed limited function and automatic climate control.

Ford dealers have already started accepting pre-bookings for the new EcoSport, while deliveries are being promised in the second week of November. The vehicle will officially go on sale on November 9, 2017.

Launched in 2013, the EcoSport was the first model in the compact SUV segment. After initial success, the sales of the SUV have been witnessing a constant drop. In order to compete against the likes of Tata Nexon and Maruti Vitara Brezza, the American automaker is aiming to achieve competitive pricing for this sub-4 meter SUV. Read About – New Ford Figo Hatchback

The company has confirmed that the 2018 Ford EcoSport is equipped with an all-new 1.5-litre, 3-cylinder Ti-VCT petrol engine. This gasoline engine is an all-aluminium block, which makes it lighter and more fuel efficient. The new naturally aspirated engine is claimed to return faster throttle response and 7% more fuel efficiency than the four-cylinder unit. This engine churns out a maximum power output of 121.3bhp at 6,500rpm and a peak torque of 150Nm at 4,500rpm. It is 13bhp more powerful and 10Nm torquier than the current 1.5-litre, 4-cylinder petrol unit. This model is also the most powerful car in its league.

Other engine options will include the existing 1.0-litre EcoBoost petrol and 1.5-litre TDCi diesel. The former is capable of producing 123bhp of power and 107Nm of torque, while the oil burner is good for 99bhp of maximum power and 205Nm of torque. The company is likely to tune the diesel engine for higher power and fuel efficiency. Transmission options on the carline will include a 5-speed manual and a 6-speed powershift dual-clutch gearbox.

The EcoSport facelift is available with two petrol and one diesel engines – 1.0-litre EcoBoost, new 1.5-litre 3-cylinder petrol and a 1.5-litre TDCi diesel. While the EcoBoost engine is claimed to deliver 18.9kmpl, the EcoBoost engine returns an ARAI certified fuel economy of 22.7kmpl. The new 1.5-litre, 3-cylinder petrol engine is claimed to be 7% more fuel efficient than the 4-cylinder unit. It is expected to deliver around 17kmpl of mileage. 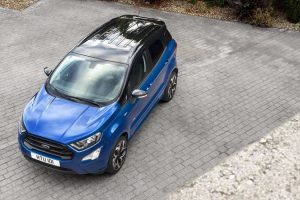 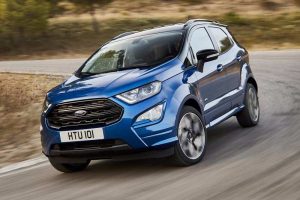 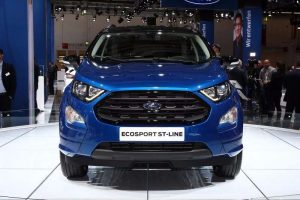 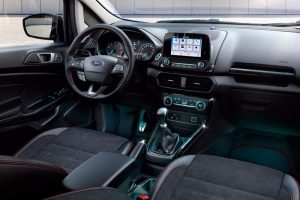 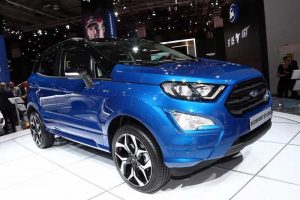 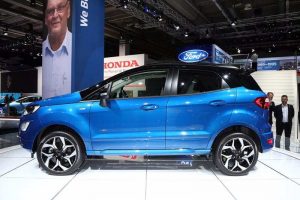 With new design and a more up-market cabin, the 2018 Ford EcoSport will receive a minor price hike. It will rival the Maruti Vitara Brezza, Tata Nexon and Mahindra TUV300.

Dimensionally, the updated model is likely to remain the same. It measures 3,999mm in length, 1,765mm in width and 1,708mm in height, and has a wheelbase of 2,520mm. With lighter engine, the new EcoSport could be lighter than the outgoing model that improves its handling. The luggage carrying capacity of the SUV stands at 346-litres.

The new EcoSport facelift comes with comprehensive design upgrades, which makes it look aesthetically appealing and premium. Majority of the changes are offered on the front fascia, which now has new trapezoidal grille with silver finish, re-profiled headlights with projector units and sculpted bonnet. The new bumper features triangular shaped fog lamps. The side profile is largely similar to the existing car, except for the new alloy wheels and ORVMs with integrated blinkers. At the back, the SUV gets subtle design changes in the form of revised LED taillights, new tailgate mounted spare wheel cover and bumper.

The interior too receive significant changes that give it a refreshing feel. Most notable change is the new 8-inch touchscreen infotainment system. It gets the Ford SYNC 3 infotainment system which is compatible with Apple CarPlay and Android Auto. The compact SUV also support navigation system, voice recognition and applications. The car gets a revised dashboard layout with a newly laid out center console. The floating touchscreen also works as a display for the rear view camera. Besides, the SUV gets new switchgear and grab rail, a high-quality 675-watt, 10-speaker audio system with B&OPLAY-branded tweeters and woofers at front doors and a subwoofer at the back. It also gets a new three-spoke steering wheel, center console with horizontal centre HVAC, cruise control, automatic climate control and a speed limited function.