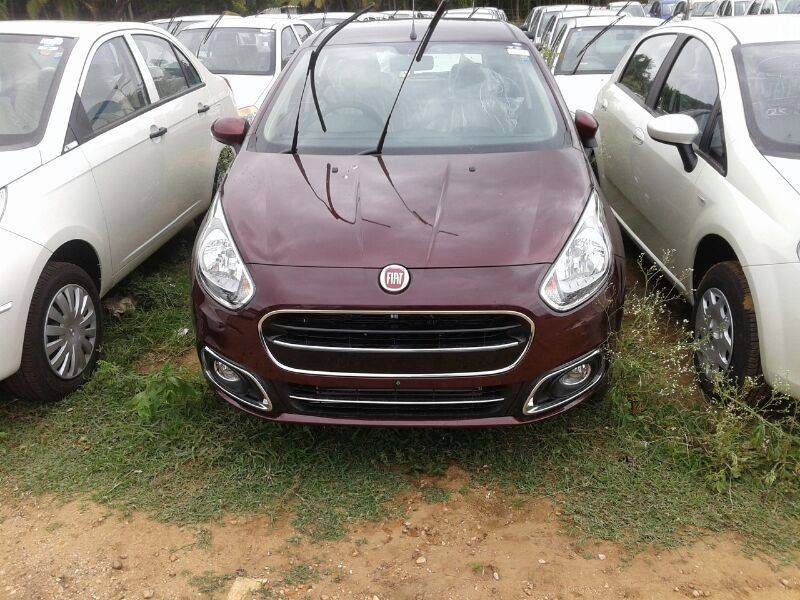 The 2014 Fiat Punto Evo facelift launch is around the corner and the updated models have already reached the dealerships in South India. The vehicle has been spotted with new exterior shades and a new set of interior shots. If media reports are to be believed, the Punto facelift will go on sale in August, 2014. The previous interior shots of the hatchback revealed an all-black interior scheme; however, the new set of spyshots reveals the dual-tone interior shades. The restyled dashboard is directly lifted from the Linea facelift. Its centre console gets a glossy black style and the air conditioner vents are surrounded by carbon fibre trims. The spotted vehicle was the top-of-the line variant as it features the automatic climate control. The updated Punto hatchback also has the rear air conditioning vents and ambient lighting.

The 2014 Punto features the Evo badge and it shares the design cues with the Avventura concept unveiled at the 2014 Delhi Motor Show. The restyled grille gets chrome lining while the headlamps resembles the concept. Its new bumper features wider grille and new chrome fog lamp assembly. The flared wheel arches have been fitted to newly designed 5-spoke alloy wheels. At the back, the hatchback gets revised taillamps and bumper with chrome and new stop lamps.

Mechanically, the 2014 Punto Evo facelift will remain unchanged. The buyers will get the same 1.2-litre and 1.4-litre petrol engine, and a 1.3-litre multi-jet diesel engine in two states of tunes. All the engines will be paired to a five-speed manual transmission gearbox.