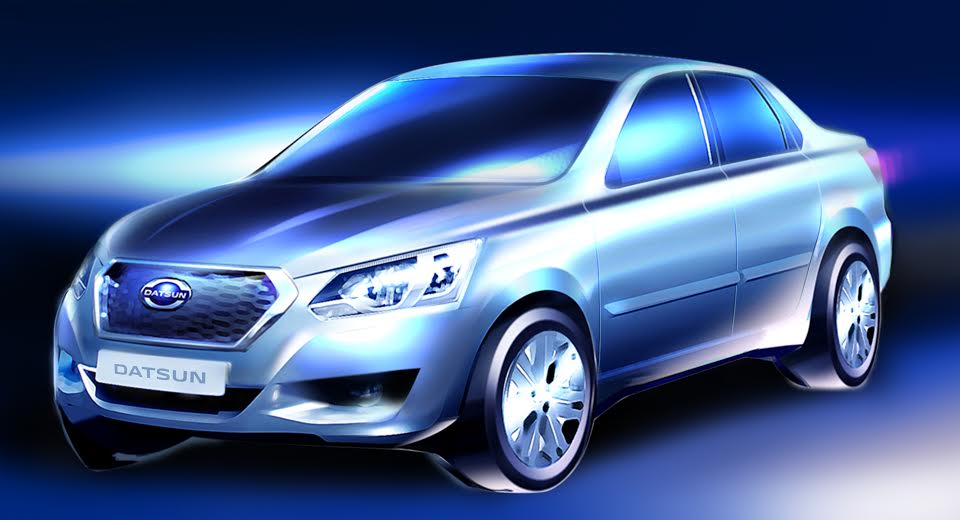 Well, this sedan is not a sub-4 metre car as it will not make its way to the Indian market. However, Nissan will bring a small sedan in the country which will be based on Go hatchback. The company recently launched the Go hatchback in India, which has received an overwhelming response from buyers across the nation. The company will launch the Go+ MPV in the country by the festive season.

Datsun Russia has recently revealed the sketch and video of the sedan. The website for the same has already gone live, however nothing about the model is revealed. The first sketches of the sedan shows a muscular stance and an upmarket look. The front profile sports the signature Datsun face with similar grille that is available in Go hatchback and its MPV sibling. Till the C pillar, this sedan looks quite identical to the Go.

If media reports to be believed, the compact sedan will be based on a Landa Granta. The vehicle had already been spotted fully undisguised during its test rounds in Russia. Datsun has a clear strategy of developing vehicle using local components, instead of global products, which suits the taste of local market. The new Datsun sedan is expected to be priced around 380,000 rubles (approximately Rs. 7 lakh).  It is expected to hit the Russian markets by the end of this year.

The Go sedan will sport a longer wheelbase than the hatchback to offer a spacious cabin. The Indian model is likely to share most of its interior trim and feature with the Russian sedan. For Indian buyers, the sedan will be sub-4 metre in size, and will compete against the likes of the Maruti Suzuki Swift Dzire, Honda Amaze, Hyundai Xcent and Tata Indigo eCS.

Under the hood, the Datsun sedan is expected to be powered by the same 1.2-litre petrol engine that produces 67bhp and 104Nm of torque. Power is transmitted to front wheels via a five-speed manual transmission gearbox.