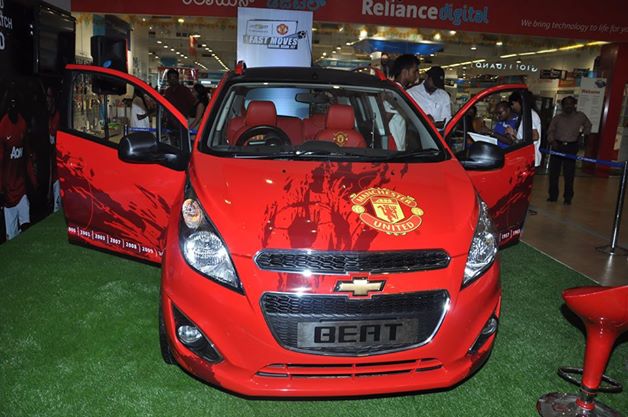 General Motors India will launch the Beat and Sail U-VA Manchester United editions in the country on July 7. Unveiled at the 2014 Delhi Motor Show, the hatchbacks are painted in the Manchester United Football team colours. Chevrolet is the official sponsor of the club. It seems like Chevrolet is aiming to capitalize on the growing fever for FIFA world-cup by introducing the special editions of Beat and Sail U-VA. Both the editions have been painted in a prominent striking red shade. The exteriors and interiors of the hatchbacks feature the Manchester United badge. The side profile of the hatchback gets body decals, body colored ORVMs, roof rails and a new set of alloy wheels. At the front, the special editions equipped with chrome lining. Inside the cabin, the Chevrolet Beat and Sail U-VA Manchester Editions get leather seats in red and black colour, leather wrapped steering wheel and an advanced 2-DIN music system with 4 speakers and Bluetooth connectivity. It also comes equipped with illuminated scuff plates and reverse parking sensors. Mechanically, both the Beat and Sail U-VA Manchester United editions remain unchanged. The Chevrolet Beat is powered by a 1.2-litre petrol engine producing 79bhp and 108Nm of torque, while the diesel version gets 1-litre mill that develops 57bhp and 150Nm of torque. On the other hand, the petrol variant of the Sail U-VA has 1.2-litre engine producing 86bhp and 113Nm of torque. The oil burner is powered by a 1.3-litre Fiat Multijet engine producing 77bhp and 205Nm of torque. Power is transmitted to front wheels via a five-speed manual transmission gearbox. Both the vehicles have reached the dealerships and are expected to be priced around 50,000 more than the standard model.