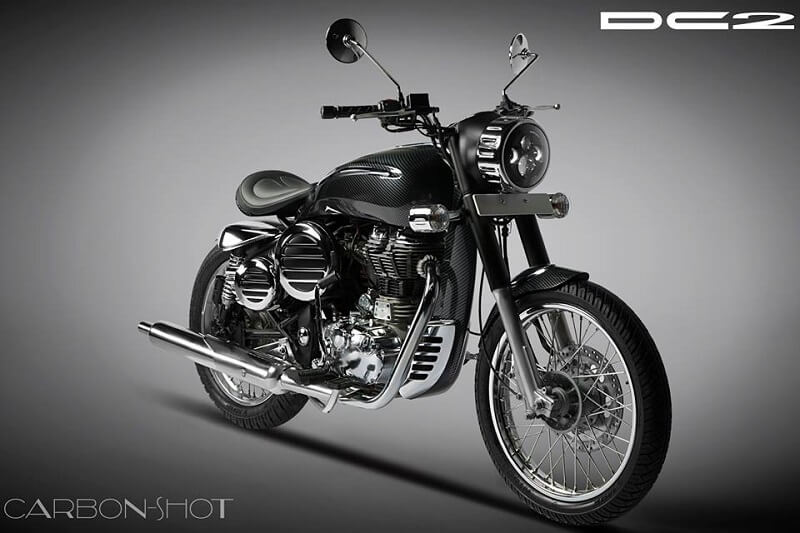 We bring you top 5 best modified Royal Enfield Classic 350 that may give you some custom ideas.

Is there a better feeling than riding a bike through picturesque routes or getting caressed by cool breeze and quietly absorbing the noise of wind that seems like music to most bike lovers? If the answer is yes, nothing gives you as much pleasure as being astride the bike. When it comes to motorcycles, we Indians have an affinity towards the classic Royal Enfield bikes that are known for its retro styling. The Classic 350 from RE is again quite popular and if you already own one, we bring you top 5 best modified Royal Enfield Classic 350 that may give you some custom ideas. 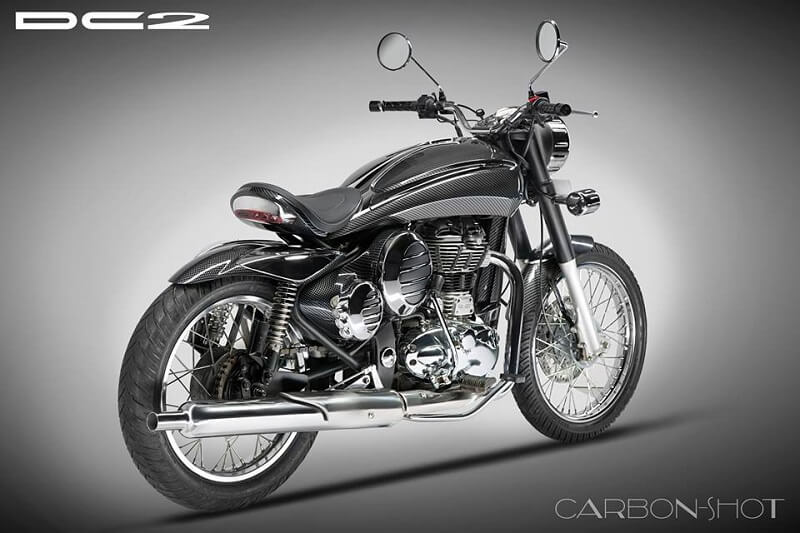 We have often seen custom cars modified by DC Design but here is an example of mod Royal Enfield Classic 350 that has been customized by the renowned design house. Called the Royal Enfield DC2 Carbon-Shot, it gets a lot of carbon fiber bits. Changes have been made to the front fender, carbon fiber headlamps that come with LED units, a circular battery box cover etc. The single seat is wrapped in premium leather and it uses LEDs for indicators and stop lamps.

Modified RE Classic 350 by Grid 7 Customs 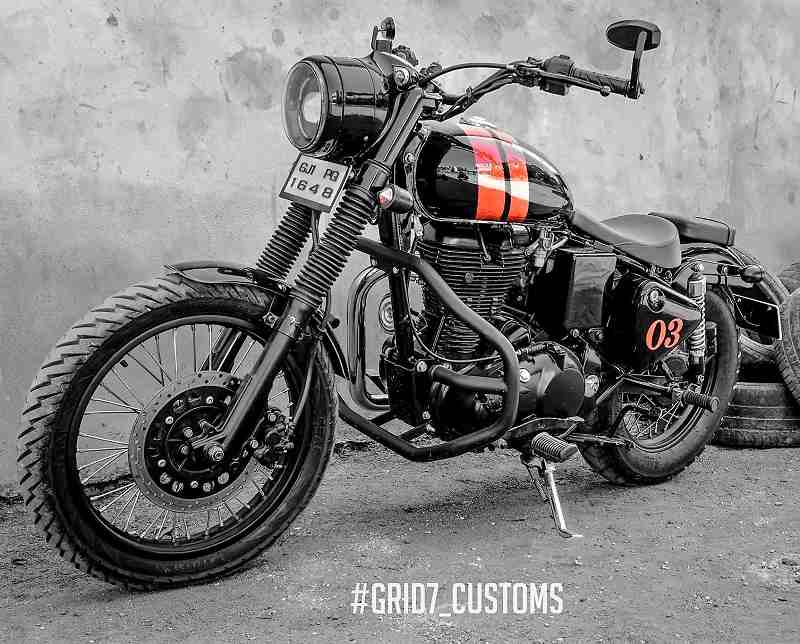 This mod RE Classic 350 has been customized by Grid 7 customs and it receives copious changes. Prominent tweaks have been made to the engine. To start with, the crank weight has been increased that means more torque. It also features a custom short exhaust system that improves bike’s performance. To allow aesthetic changes, the frame gets minor tweaks and the swing arm has also been extended by 2.5-inch. Whereas, the front shock absorber and stem have also been altered to reposition the height to give it brat-bobber look.

RE 350 Modified by ParPin’s Garage 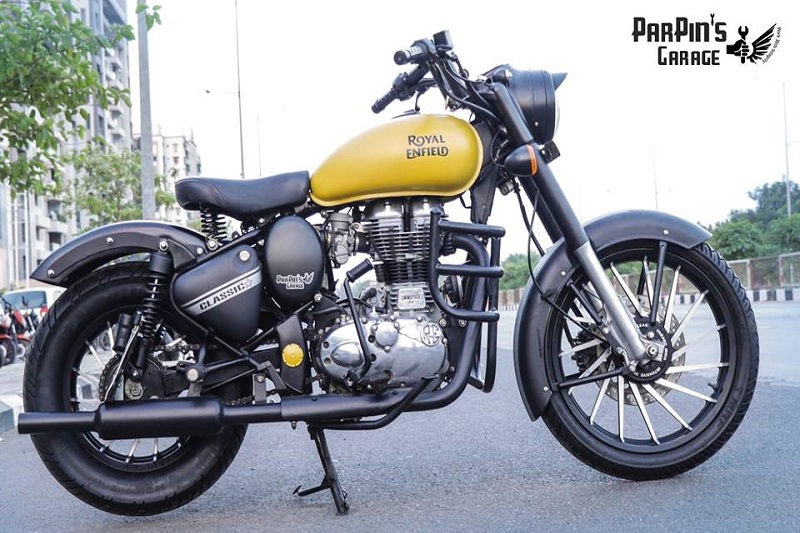 What stands out in this custom RE Classic 350 is the yellow paint job around the fuel tank. It comes out well on the black backdrop. Besides, the bike gets a couple of changes such as a huge leg guard in front, matte black finish around headlight cluster, wider handlebars etc. Even the exhausts receive smaller can along with larger outlet pipe. Some silver bits can be seen around fenders, while the front forks get a matte black finish. The spoke wheels have been ditched for new alloys, that said, it features 140 section TVS tyre at the back and MRF tyre in front.

RE Classic Modified by Singh Customs 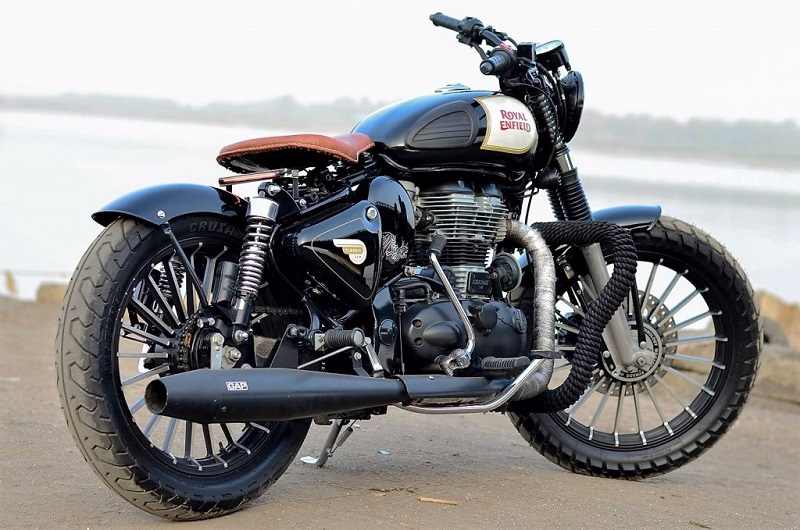 The Surat based Singh Customs have done a fab job on this custom Royal Enfield 350 Classic. One of the prominent changes on the bike include the custom black and chrome alloy wheels that replace the stock metal spoke units. It also gets a thick dual-purpose wheel in front that further enhances its visual appearance. Other bits such as Scrambler inspired custom fenders, new LED headlamp, open telescopic forks, new instrument console, Black custom silencer etc can also be seen. The front seat features a leather covering in brown, while the rear seat has been removed. Moreover, it gets matte black finish around the lower part of the engine.

Modified RE Classic 350 by Rajputana Customs 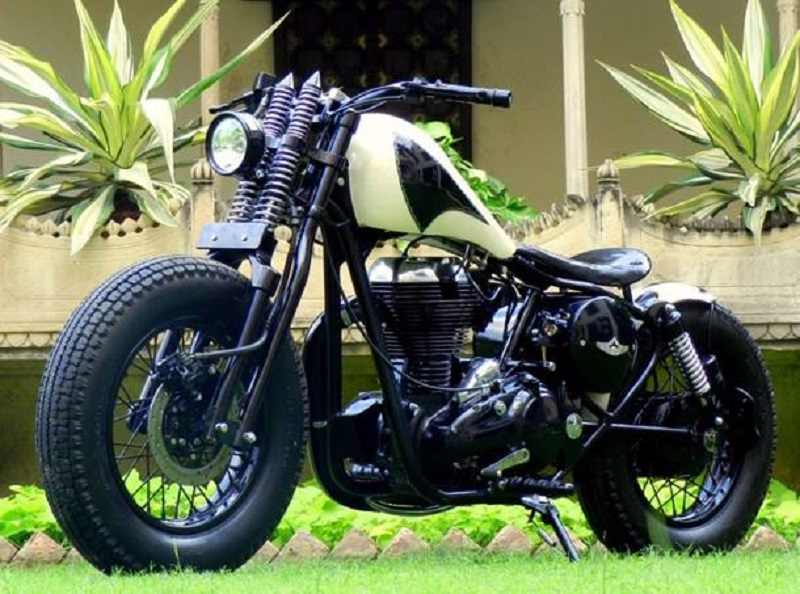 Here is another example of customized Royal Enfield modified by Jaipur based Rajputana Customs. This mod RE Classic 350 has been renamed ‘Rata’ that signifies the dark side of the night. It features an all new paint job and other styling bits to give it a cruiser look. In addition, it gets springers forks, new rake and trail and tool box among other metal fabrication changes. Even the fuel tank is all new, featuring a dual tone colour tone and it rides on Avon tyres. The frame has also been tweaked to allow prominent design changes.