The two-wheeler segment in India has evolved from a scooter only market to an exponentially growing space attracting new brands every year. From the time when choices were limited and fewer segments existed, the motorcycle segment has transformed into a humongous space today with each segment thriving rapidly. The motorcycles have gained traction lately, although it is more prevalent in global markets, like America where cruisers have been popular since the 1930s. Attributed to high set handlebars, unconventional riding position and contemporary styling, the cruisers have carved a niche spot amid various segments. 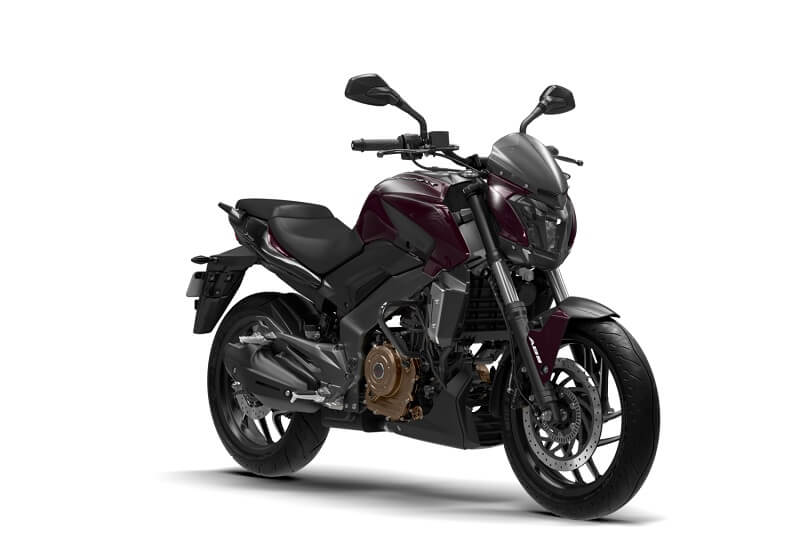 Before making an official debut in December last year, the new motorcycle in Bajaj’s range was first brought to light in concept form at the 2014 Auto Expo. Initially meant to be a new model in Bajaj’s famed Pulsar series, it was previously named Pulsar CS400, before the Dominar 400 nameplate was zeroed in. Before we get into the details of the cruiser, here is some quick trivia on the newly formed brand. The name is taken from a Spanish word, Dominar, which means dominating. Taking into account that Bajaj plans to launch more performance motorcycles under the brand, ‘Dominar’ seems to be a fitting choice for it. Coming to the specifications, Dominar 400 uses the 373.3cc single cylinder engine good for 35bho of power at 8000rpm and 30Nm of torque at 6500rpm. It uses a six-speed manual transmission and offers a top speed of 148kmph. Now the engine powering the cruiser is the same unit that is used in the Duke 390, though, it has been detuned to return higher fuel economy ranging between 25kmpl to 30kmpl. In terms of design, most of the cues have been retained from the concept version including sporty front cowl, raked front, large LED headlamp and sweptback visor. Other than these, it also gets the tank mounted digital display for speed & gear position, stepped saddle, digital instrument cluster etc. Available between Rs 1.36 lakh to Rs 1.50 lakh, the Dominar 400 is available with two variants with twin-channel ABS on the top-spec variant. 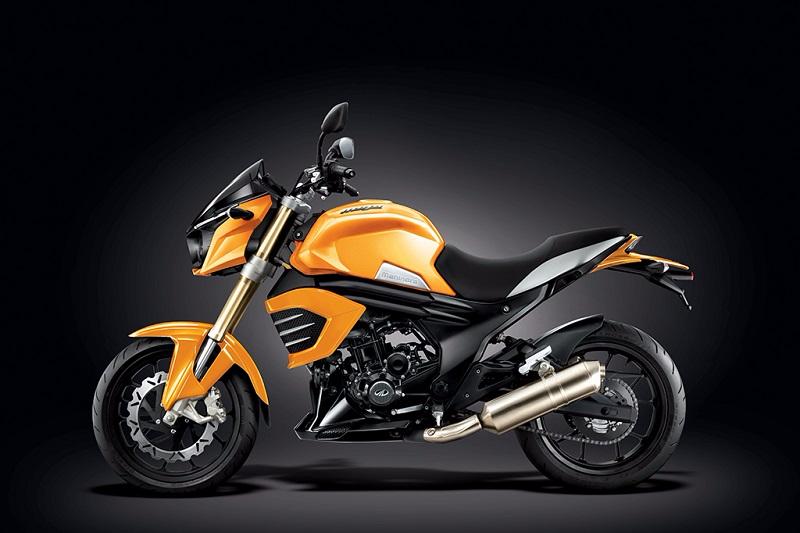 Powered by the 295cccc liquid cooled engine, Mojo might not be as impressive in visual appeal, but has made a mark in terms of performance. The twin headlamp cluster and front fairing reinforce the aggressive look. What may or may not work for some is the body frame finished in gold. Other key design elements on the Mojo like the dual tail pipes and fat Pirelli Diablo Rosso II tyres add value to the appearance. Despite being a single cylinder motorcycle, it looks large and sculpted with the huge cowls set by the side of radiators come for its rescue. As mentioned earlier, the bike draws power from the 295cc, liquid cooled, 4-stroke single cylinder DOHC engine putting out 27bhp at 8000rpm and 30Nm of torque at 5500rpm. Transmission used on the Mojo is a constant mesh six-speed unit and suspension duties are taken care of by the upside forks and gas charged mono shockers. Currently available in two variants, Mahindra is mulling to add more variants to the line-up in the coming years. The two new variants in the line-up will reportedly be the Mahindra Mojo Scrambler and Adventure Tourer, showcased last year at the 2016 Auto Expo. As for the current model it is available for Rs 1.69 lakh (ex-showroom, Delhi). 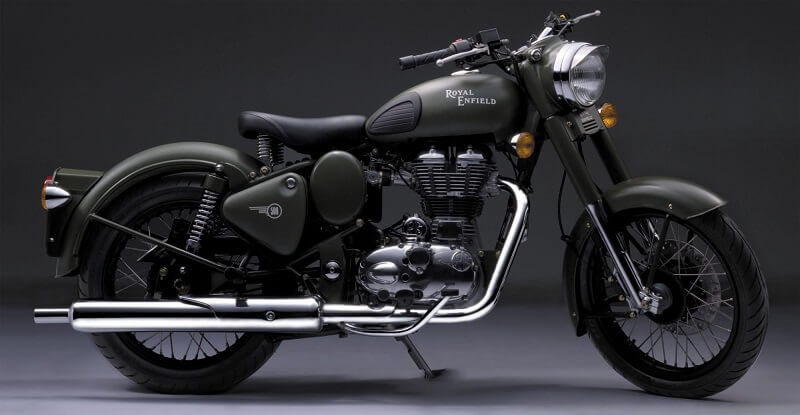 The Classis 350 and 500 models in the Royal Enfield range share comprehensive design cues. That said the 350 model mirrors elder sibling 500 in terms of styling. It would rather be fitting to say that the Classic 350 is a stripped down version of the Classic 500 model. Embracing a retro design, these models remind of the vintage bikes from the 1950s. Power on the Classic 350 comes from the 346cc, single cylinder, 4-stroke engine good for 19.8bhp of power at 5250rpm and 28Nm torque at 4000rpm. The single cylinder engine uses a five-speed constant mesh gearbox for transmitting power to wheels. Equipment on the Classic 350 is decent; it gets the analog speedometer, battery indicator and odometer on the instrument panel, while the ABS, tripmeter and alloy wheels have been left out.

The Royal Enfield Classic 500 is essentially a larger version of the 350, using a higher capacity 499cc, single cylinder, 4-stroke engine with Twinspark technology. Mated to a five-speed gearbox, the single cylinder engine makes maximum power of 27.2bhp at 5250rpm along with a healthy torque of 41.3Nm at 4000rpm. Mimicking other models from Royal Enfield, the Classic 500 gets heavy chrome work around the body. Even the headlamps, tail lamps and fuel tank remind of other REs in the line-up. 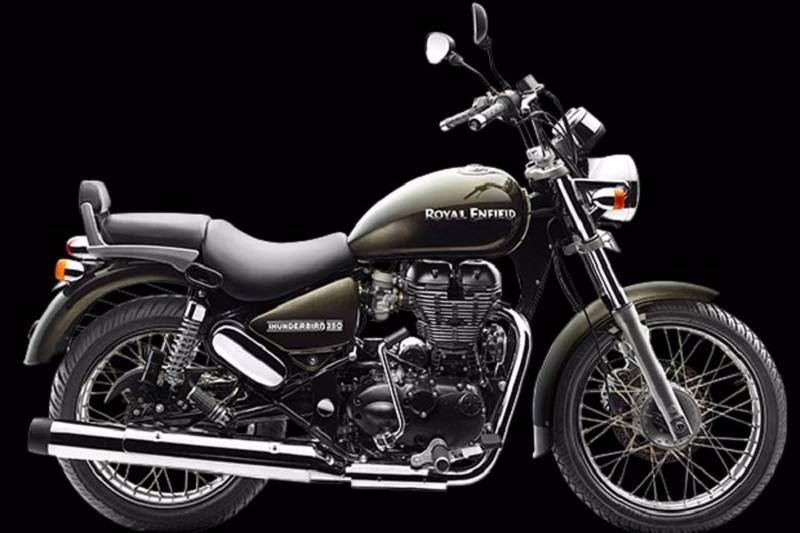 An old nameplate in the RE range, the life cycle of Thunderbird 350 spans for over 15 years. Aesthetically, it has witnessed copious change in these years. The LED tail lamps, teardrop fuel tanks and digital instrument cluster are among the new additions, although, there has been no change in the overall silhouette. Similarly, the chrome laden work on the Thunderbird 350 has been retained. Other key elements such as sculpted fuel tank, upright riding position, large cushioned seat and multi-spoke alloy wheels enhance the visual appearance. Power on the Thunderbird 350 is derived from the 350cc, air-cooled, single cylinder engine churning out 19.80bhp at 5250rpm and 28Nm of torque. As for the fuel economy, the SUV is claimed to return 23kmpl. At 192 kg, Thunderbird 350 is a heavy motorcycle with low power to weight ratio affecting the performance. In terms of equipment, the bike gets LED tail lamps, projection type headlamps, engine kill switch, analog speedometer etc. Priced at Rs 1.50 onwards, the Thunderbird 350 is a viable offering it its space. 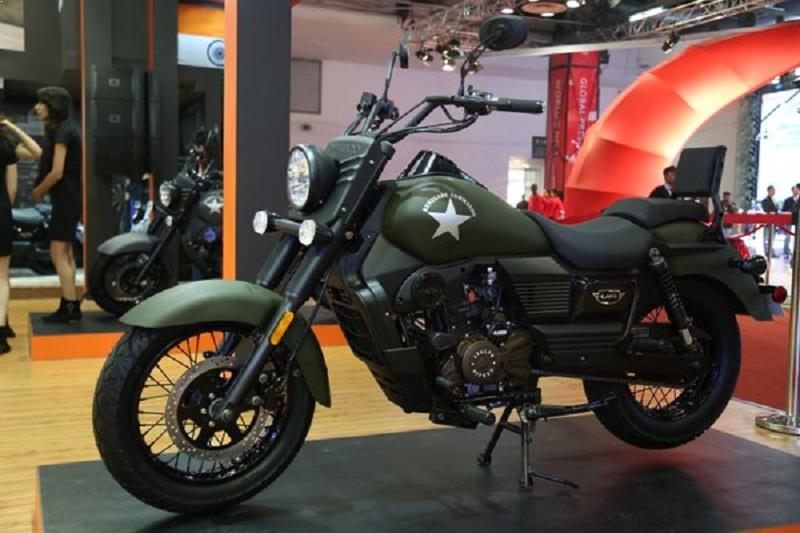 Making a grand entry at the 2016 Auto Expo last year, the cruiser from the stables of fabled US brand, UM Motorcycles is a rugged machine with imposing looks. Finished in matte black, it sports a white star on the sculpted fuel tank. This white star on the bike corresponds to the US military. In front it gets a round halogen headlamp and highly set handlebars are in tandem with the cruiser look. It gets a separate seat for the rider and pillion, with the pillion seat positioned slightly higher. For mechanical strength it uses the same unit that does duty on the Sport S model, belting out same power and torque. The 279cc, single cylinder, water-cooled engine makes maximum power of 24.8bhp at 8500rpm and top torque of 22Nm at 7000rpm. Now compared to the above mentioned rivals, this one is priced slightly higher, along the lines of Royal Enfield Classic 500 at Rs 1.76 lakh (ex-showroom, Mumbai).