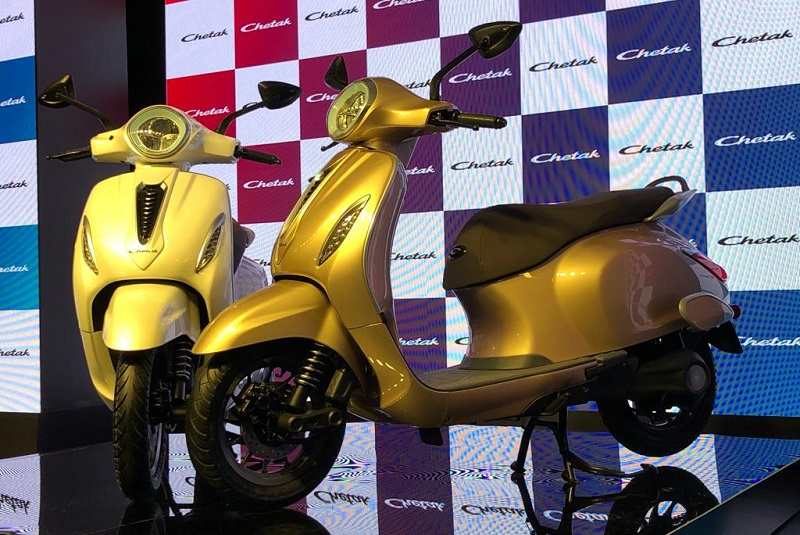 Bajaj Auto has finally re-introduced the iconic Chetak brand in the Indian two-wheeler market. The new Chetak is an all-electric scooter, which will go on sale in a phased-manner in India. The company is banking on the popularity of the classic India scooter, Bajaj Chetak to deliver same success with the new electric scooter. The new scooter has been introduced in the presence of Union Minister for Road transport and Highways, Nitin Gadkari. Bajaj has also flagged off an innovative Chetak Yatra, which starts from New Delhi and will cover a range of cities and will end in Pune.

With the new Bajaj Chetak, the homegrown automaker marks the re-entry in the scooter space after nearly 2 decades. The Bajaj Chetak nameplate is hugely successful and is still carries a following pan-India. Bajaj Auto has already started production of its first electric scooter – Chetak on September 25, 2019 at the Chakan plant.

Bajaj will start selling the new Chetak scooter from January 2020 and Bengaluru and Pune are going to be the first two cities to get it. The scooter will be retailed through Bajaj Pro-Biking network. The Bajaj Chetak features an IP67 rated high-tech lithium ion battery with NCA cells. The battery can be charged using a standard 5-15amp electrical outlet. The on-board intelligent battery management system (IBMS) controls charge and discharge seamlessly. Bajaj is also offering a home-charging station at a nominal cost.

The Bajaj Chetak offers 2 drive modes – City and Sports. The scooter gives a range of around 95-100km in City mode and around 85km in Sport mode. It has regenerative braking system that converts braking heat into kinetic energy, which enhances its range. The powertrain of the scooter features a unique single-sided cast aluminium swing arm, which houses the traction motor that drives the wheel through a high-efficiency automated gearbox.

The Bajaj Chetak comes with retro design with modern features on-board. It gets a hypnotic horseshoe shaped LED headlamps with daytime running lights, single-side suspension set-up and wider seat and curved panels. Other features include feather touch activated electronic switches and sequential srolling LED blinkers. It gets a large all-digital instrument console with clear readabouts. The scooter is claimed to offer fully-connected riding experience. The Chetak mobile application gives the rider a comprehensive overview of all aspects of vehicle and its ride history .