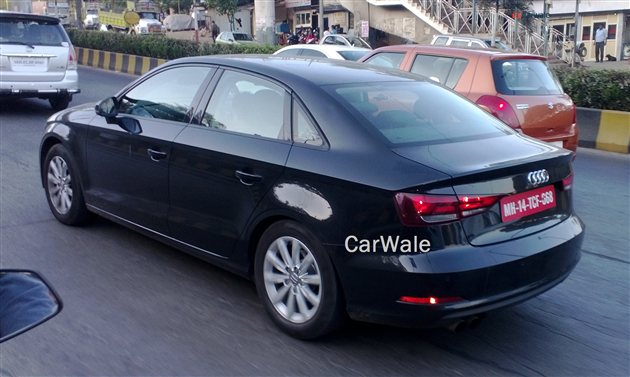 Audi India is geared up to launch its cheapest car- the Audi A3 sedan in India by the festive season, 2014. The vehicle will come via CKD (completely knocked down unit) route, which will help the company to price it competitively. Moreover, Audi will also introduce the performance version of the A3 named as S3 in the Indian car market. Recently, the A3 has been spotted during its test rounds in Mumbai.

Based on the popular MQB platform, the Audi A3 sedan measures 4.46m in length, 1.8m width and has a wheelbase of 2.64m. The car is spacious enough to accommodate five adults comfortably and it has a large boot space of 425-litres which can carry 3-4 suitcases.

At the time of its launch, it will be the only product in its segment. However; Mercedes-Benz India will launch the CLA Class by the end of this year and BMW is also working on a 1-Series sedan which will also make its way to Indian market by next year.

The new Audi A3 sedan will be made available in both petrol and diesel guise. While the gasoline version will get the 1.8-litre TFSI unit that produces 168bhp and 320Nm of top torque, the oil burner will be powered by the 2.0-litre TDI motor producing 150bhp and 320Nm of torque. Both the engines will be coupled to seven-speed DSG gearbox, which drives the power to front wheels of the car.

If media reports to believe, the company might also launch the stripped down version of Audi A3 sedan just like Q3 S to attract more buyers. The exact pricing details for the sedan is yet to be announced, but we expect it to be priced in the range of Rs. 23-28 lakh.