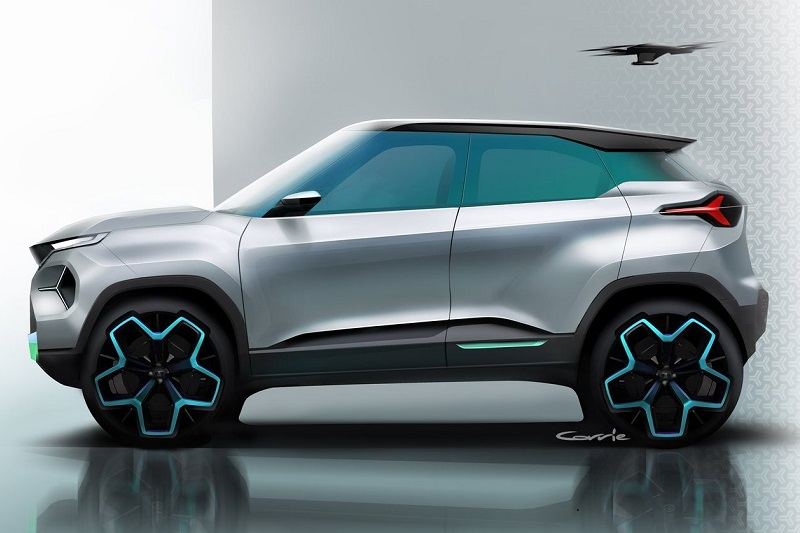 Official dates of the 2020 Auto Expo have already been announced. All car manufacturers will put their best foot forward and showcase some exciting concepts and models. Tata Motors will unveil a plethora of products that will include a couple of electric vehicles and all-new models. Here, we have list the top 5 all-new Tata cars that will be showcased at the Delhi Auto Expo 2020.

Tata H2X mini SUV concept had its world premiere at the Geneva Motor Show in March, 2019. The home-grown carmaker might preview the production-ready version of the H2X at the Auto Expo 2020. While official name of the production car is yet to be announced, it’s reported to be called Tata Hornbill. After the Altroz hatchback that’s due for 2019 festive season, the Hornbill be the second product to be based on the Alfa modular platform. Similar to Tata’s new breed cars, the mini SUV will feature the new-generation Impact 2.0 Design language. The production version is likely to retain most of the design bits from the Tata H2X concept. In terms of dimensions, the mini SUV will be wider and taller than the Nexon subcompact SUV. It might come either with the BS6-ready 84bhp, 1.2L petrol engine or 100.5bhp, 1.2L petrol motor. The carmaker is also working on pure electric version of the Tata H2X.

Similar to the Tata H2X concept, the Tata Buzzard 7-seater SUV made its global debut at the 2019 Geneva Motor Show. The SUV could make its appearance at the Delhi Auto Expo 2020, followed by its launch. Rumour has it that the Buzzard could be named Tata Cassini in India. Tata Buzzard, the 7-seater version of Harrier, will be placed against the Mahindra XUV500 and the upcoming MG Hector 7-seater. Compared to the Harrier, the new 7-seater SUV is longer by 62mm. Though, wheelbase of both models is same. The Buzzard shares its platform, design elements, features and engine with its 5-seater sibling. Though, the carmaker will make minor cosmetic changes along with a pack of new comfort goodies and safety features. The 7-seater Buzzard will come with 2.0L turbocharged diesel engine that will be tuned for producing 170PS of power and 350Nm of torque. It will get a standard 6-speed manual gearbox and an optional 6-speed torque converter unit.

The home-grown carmaker will unveil an-all new compact SUV at the Delhi Auto Expo 2020. Codenamed Tata Blackbird, the SUV will take head-to-head against the Hyundai Creta, Nissan Kicks, Renault Captur and Kia Seltos. In terms of price and positioning, the Tata Blackbird will sit between the Nexon and Harrier. Reports suggest that the Tata Blackbird will be re-badged Cherry Tiggo 5X that’s already on sale in Chinese market. The Tiggo 5X subcompact crossover, which is positioned between the Tiggo 3X and Tiggo 5X, comes with a 1.5L turbocharged engine that’s good for 147bhp. Some of its key features include 6 airbags, electronic stability programe, electronic parking brake, panoramic sunroof and start/stop button. The Cherry Tiggo 5X is 4358mm long, 1830mm wide, 1670mm tall along with a 2630mm wheelbase.

Tata Motors recently confirmed that it will expand its electric vehicle lineup with 4 new models. The lineup will include Nexon EV, Altroz EV, the long-range Tigor EV and an unnamed model. The carmaker hasn’t yet revealed details of the Tata Nexon electric. Though, it’s likely to get a lithium-ion battery pack fitted under the seat. It might come with AC and DC fast charging options. Design and features of the Nexon EV will be exactly similar to the regular model. The electric iteration of the subcompact SUV will be showcased alongside the Nexon facelift at the Delhi Auto Expo 2020 in February.

Tata Altroz hatchback that was first previewed at the 2019 Geneva Motor Show, will soon see a release in the Indian market. The carmaker will also bring in the electric version of the Altroz hatch sometime next year. Prior to its official launch, the Tata Altroz EV will make its India debut at the Auto Expo 2020. The electric hatchback features a permanent magnet AC motor with single speed gearbox. It delivers a claimed range of 250-300km on a single charge, takes 60 minutes to get charged up to 80%. Similar to the regular model, the Altroz EV is based on the new Alfa platform and measures 3988mm in length, 1754mm in width and 1505mm in height with a wheelbase of 2501mm.