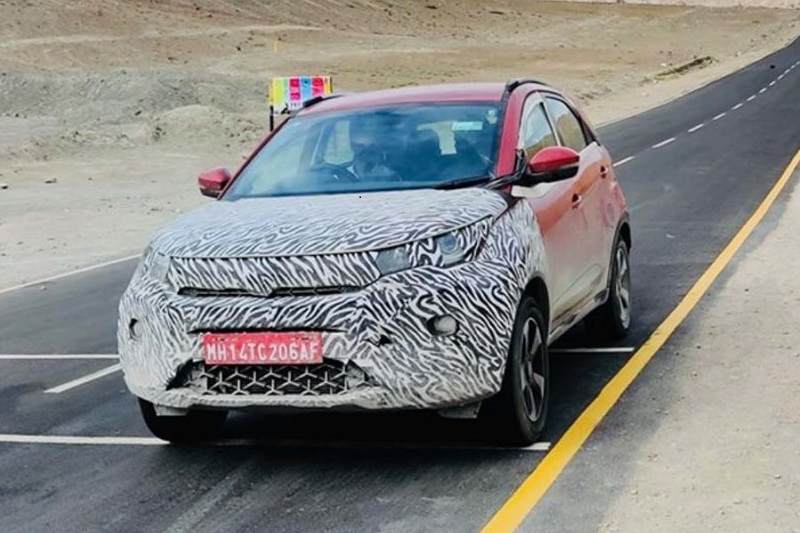 The near-production model of the 2020 Tata Nexon facelift was recently caught on camera during its test rounds in Ladakh. Despite the heavy camouflage at the front end, the newly-designed projector headlamps and a new trapezoidal grille with a thick chrome strip on the upper part are visible. The updated version of the subcompact SUV might also get the redesigned wheels and taillamps. Read – Tata H2X Mini SUV Might Come Ziptron Electric Engine

The 2020 Tata Nexon facelift, however, will retain the original design and dimensions. Interior will also receive subtle changes including a new digital instrument cluster and a steering wheel similar to the Altroz. The subcompact SUV might also get a larger touchscreen infotainment system supporting Android Auto and Apple CarPlay along with Voice recognition feature. Read – 8 Interesting Facts About Tata Altroz

BS6 (Bharat Stage VI) complaint version of the existing 1.2L petrol and 1.5L diesel engines will be made available on the 2020 Tata Nexon facelift. The gasoline unit makes a peak power of 110PS against 170Nm of torque, and the oil burner delivers power worth 110PS with 260Nm of torque. Both powertrains can be had either with a 6-speed manual or an AMT gearbox.

The new Tata Nexon will hit showrooms early next year. The carmaker might be showcased the updated version of the subcompact SUV at the 2020 Auto Expo alongside the Nexon EV. The electric iteration of the Nexon will be equipped with Tata’s all-new Ziptron technology that’s claimed to deliver ‘peppy performance’.