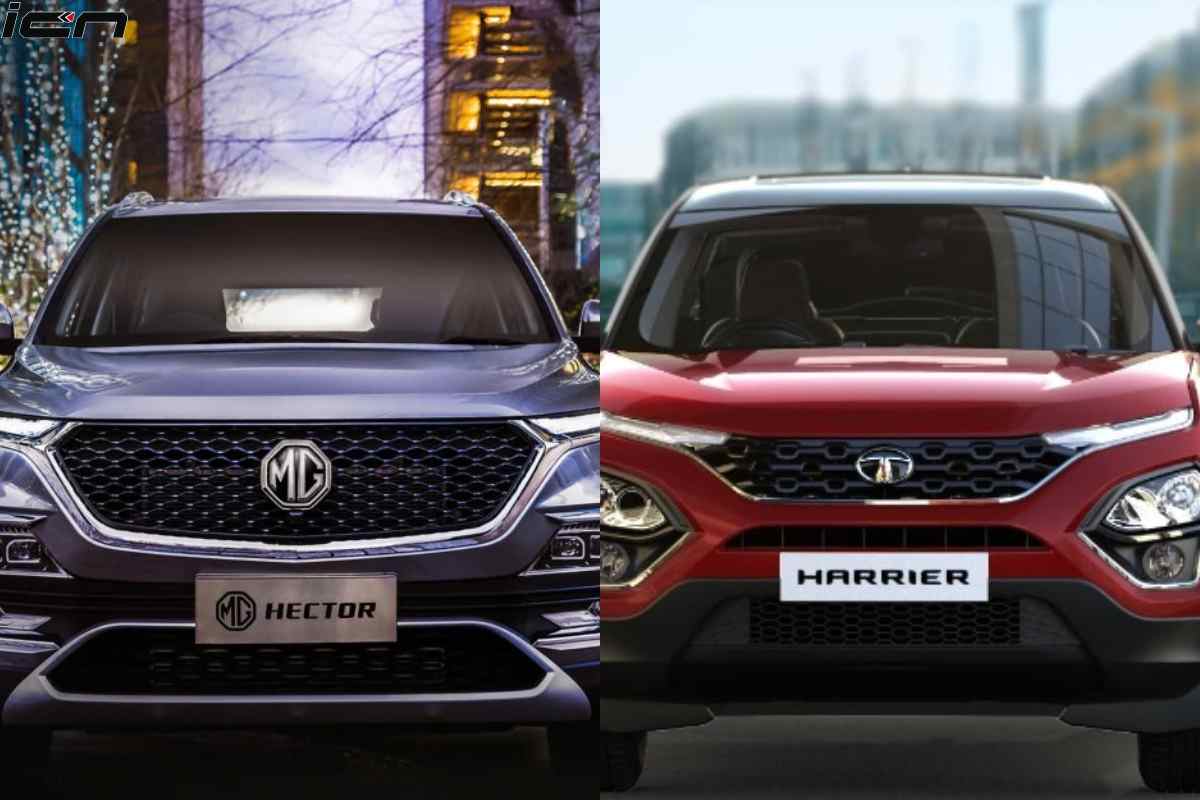 The Tata Harrier 5-seater premium SUV has finally received the much-needed makeover to compete well against the growing competition in the form of the MG Hector and the upgraded Mahindra XUV500. Launched in January 2019, the Harrier SUV gets significant changes in the form of powerful engine, automatic gearbox and some useful features. Here is a specifications based comparison between the Tata Harrier and the MG Hector. Compare 2020 Tata Harrier Vs MG Hector specs, exterior, interior and dimensions –

The Harrier gets an upgraded version of the 2.0-litre KRYOTEC diesel engine, which is basically the re-badged Fiat’s MJD unit. Earlier, this powertrain produces 138bhp of power and 350Nm of torque. With the recent updates, the BSVI compliant 2.0-litre engine produces 168bhp of power and 350Nm of torque. Adding to it, the diesel Harrier also gets a Hyundai-sourced 6-speed torque convertor automatic gearbox. A six-speed manual gearbox driving the power to the front wheels is available as standard. Also See – Tata Gravitas Vs Harrier – What’s The Difference?

The MG Hector 7-seater SUV is powered by a 2.0-litre diesel engine, which is also sourced from the Fiat-Chrysler Automobile. This engine is capable of producing 168bhp of power and 350Nm of torque. Power is transmitted to the front wheels via a 6-speed manual gearbox.

In the diesel version, Tata Harrier now has an edge over the MG Hector. While the former gets a 6-speed torque convertor automatic as well as manual gearbox, the Hector is available in manual gearbox option only.

For people not in the know, the MG Motor is the British subsidiary of the Chinese-owned automotive corporation – SAIC Motor, and the Hector is a rebadged version of the Baojun 530. The Hector looks largely identical to the Baojun 540 except for some subtle changes to make it look like MG products. The SUV gets a neat design with signature large black-finished front grille, high-set bonnet, split headlamp setup with a LED DRLs on top and main headlamp and fog lamp unit lower on the bumper, and a centrally-placed wide air-dam at the front. At the back, the SUV gets a sharp LED tail-lamps, sculpted tail-gate and dual-tone bumper with silver-finished skid plate and black bumper.

The Tata Harrier is undoubtedly one of the best-looking SUVs currently on sale in India. Based on the company’s IMPACT 2.0 Design Language, the 2020 Harrier has the resemblance with the Land Rover Discovery Sport. The SUV gets high-mounted front grille, eye brows-like LED lighting setup, a 3D LED tail-lamps with piano black finishes, split headlamp setup and LED tail-lamps. The Hector SUV rides on 17-inch alloy wheels shod with 215/60-section tyres, while the Harrier gets optional 18-inch alloys.

In terms of proportions, the Hector is 4,655mm in length, 1,835mm in width and 1,760mm in height, and has a wheelbase of 2,750mm. The SUV has a ground clearance of 192mm. It comes with a luggage carrying capacity of 587-litres. The SUV is 57mm longer and 54mm taller than the Harrier. In fact, the wheelbase is 9mm longer than the homegrown SUV.

The MG Hector is the most feature-loaded SUV in its category; however, the Harrier also gets useful features. In terms of quality, the Harrier feels stronger and safer than the MG’s SUV. The Hector is equipped with segment-largest 10.4-inch vertically-placed touchscreen infotainment system with TomTom navigation, voice commands and 50-plus internet services. On the flip-side, the Harrier gets an 8.8-inch touchscreen infotainment system with Android Auto and Apple CarPlay.

The Tata Harrier gets features like a floating 8.8-inch touchscreen infotainment system, a 7-inch MID, tilt and telescopic adjustable steering, engine start push-button and the segment-best Harman-sourced sound system with 9 JBL speakers including 4 speakers, 4 tweeters and a subwoofer. With the recent upgrades, the SUV also gets a much-needed panoramic sunroof and a 6-way electrically adjustable driver seat.