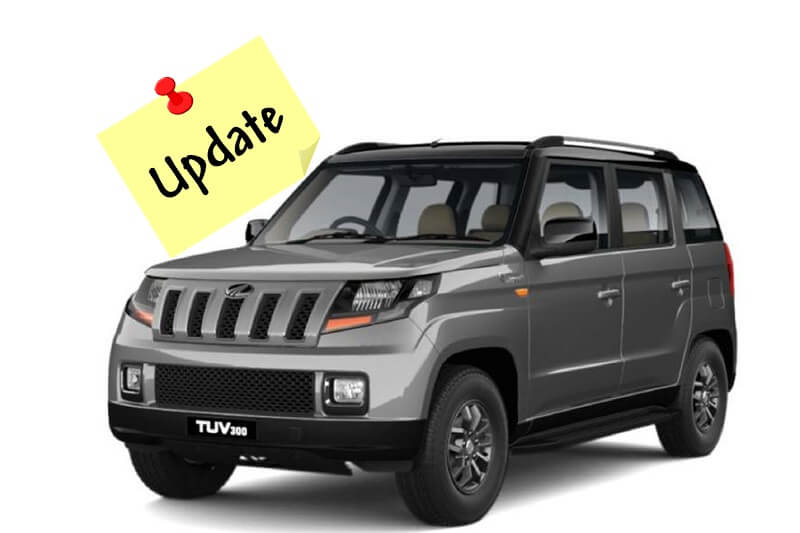 The Mahindra TUV300 facelift will hit showrooms in coming months.

Mahindra & Mahindra is on a roll. The carmaker kick started 2019 with the launch of Mahindra XUV300 compact SUV, which will soon be followed by the Mahindra TUV300 facelift. The updated version of the SUV is currently in its final testing phase and caught on camera multiple times. The latest spy pictures reveal that the new 2019 Mahindra TUV300 facelift will receive minor aesthetic upgrades along with a few new features. Mechanically, however, the SUV is likely to remain unchanged. In the compact SUV space, the new 2019 Mahindra TUV300 will continue to take head-to-head against Maruti Suzuki Vitara Brezza, Tata Nexon and Ford EcoSport.

The carmaker hasn’t yet revealed the official launch date and details of the new Mahindra TUV300 facelift. Though, the media reports suggest that the SUV’s updated model will see a release in coming months. Read – Mahindra Thar, Scorpio & XUV500 To Get Generation Change

Featuring subtle design changes and a few new features, the facelifted TUV300 is likely to witness a minor price bump. The 2019 model year is estimated to be priced around Rs 8.50 for the base variant and Rs 11 lakh for the top-spec trim. Currently, the SUV comes in the price range of Rs 8.32 lakh – Rs 10.97 lakh (ex-showroom, Delhi). Read – New Generation Mahindra Thar Launch Details Revealed

As mentioned in the beginning, the new 2019 Mahindra TUV300 facelift will retain the existing diesel engine under the hood. That means, the SUV will use the same a 1.5-litre mHawk oil burner producing a maximum power output of 100bhp at 3750rpm and a peak torque of 240Nm between 1,600rpm-2,800rpm. This motor will be complaint to the upcoming BS6 emission norms. The SUV carline will also continue to come with both manual and AMT gearbox options. Read – Mahindra Alturas G4 Prices & Details

With the current diesel powertrain, the Mahindra TUV300 delivers a claimed mileage of 18.49kmph. The SUV accelerates from 0 to 100kmph in 13.9 seconds and offers a maximum speed of 156kmph. The acceleration, top speed and fuel efficiency figures of the facelifed model are likely to remain unchanged. Read – All-new Mahindra Bolero Under Development

The facelifted model will retain the original design and silhouette. Though, it will receive newly-designed headlamps along with LED DRLs (daytime running lights) and a new chrome-stud grille. The front bumper and fog lamp assembly will also be revised. While the design of the B and C-pillar will remain unchanged, it gets sporty black finish. The 2019 model year will also come with 15-inch alloy wheels with new design and finish and new roof rails. Check Out – New-gen Mahindra Scorpio Might Look Like This

Round the back, the SUV will sport revised bumper and smoked glass taillamps. It will also get a tail-mounted spare tyre as we have seen on the Mahindra Quanto. The 2019 Mahindra TUV300 might also get new colour schemes along with the regular five single tone (Dynamo Red, Majestic Silver, Pearl White, Bold Black and Glacier White) and two dual-tone (Silver & Black and Red & Black) shades.

Changes made to the interior will be limited. The facelifted Mahindra TUV300 is likely to receive a new touchscreen infotainment system that might support smartphone connectivity like Apple CarPlay and Android Auto. It might also get an automatic climate control unit. Features such as steering mounted controls, reverse camera, keyless entry and push start-stop button could also be on board. Read – New Generation Mahindra XUV500 Launch Details Revealed

2019 Mahindra TUV300 facelift will receive minor upgrades inside and out. Though, the SUV will continue to feature the existing engine setup and gearbox options. The updated version could be slightly more expensive than the existing one.