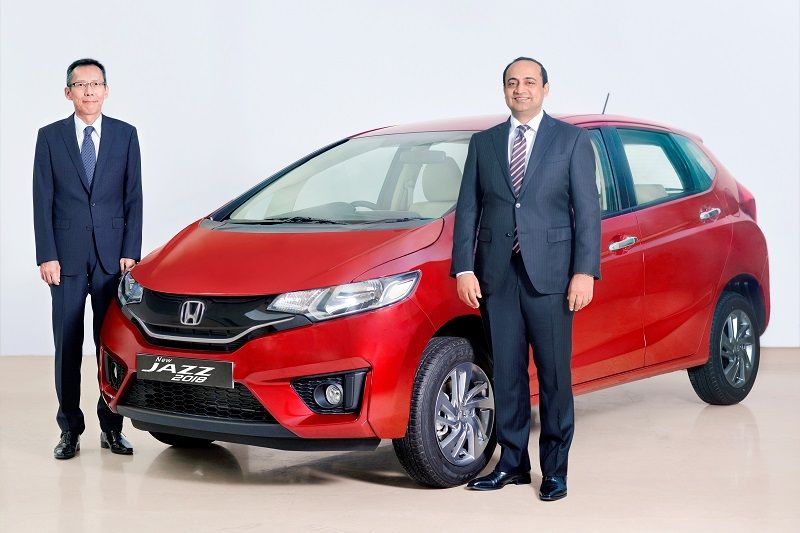 The 2018 Honda Jazz facelift has finally been launched in the Indian car market. The new model is priced between Rs 7.35 lakh and Rs 9.29 lakh (ex-showroom, Delhi). The 2018 Honda Jazz comes with minimal exterior design upgrades, but it gets better equipped cabin. Mechanically, the new Jazz remains unchanged. The company has also removed the entry-level E, S and SV variants from the petrol line-up, whereas the diesel model comes devoid of E and SV variants. This suggests that Honda is playing premium with the new Jazz.

While the global-spec Jazz facelift comes with significant design and feature changes, the India-spec model gets minimal changes in the form of revised tail-lights and wheels. It still misses out on full LED headlights. Besides, the company has also introduced two new exterior paint jobs – Radiant Red Metallic and Lunar Silver Metallic. Inside the cabin, the Jazz facelift gets maximum changes. Featuring Honda’s Man Maximum and Machine Minimum Philosophy, the new Jazz ensures spacious cabin to accommodate 5-adults comfortably. It is benefitted with a new 6.8-inch DIGIPAD touchscreen infotainment system with Apple CarPlay and Android Auto along with rear camera display.

Honda plays premium with the pricing of new Jazz facelift. The company has rempved the entry level E, S and SV variants from petrol and E and SV variants from diesel lineup. The hatchback is now available in top trim levels only – S, V and VX – priced between Rs 7.35 lakh and Rs 9.29 lakh (ex-showroom, Delhi)..

The overall profile of the new Jazz facelift remains unchanged, and it comes with minimal exterior changes. The front fascia looks exactly the same as the pre-facelift model, featuring trademark thick horizontal slat for the grille and a mesh grille on the air-dam. In fact, it still misses out on full LED headlamps. The Jazz carries the same mini MPV-like profile of the old model.

The side-profile of the hatchback is largely identical to the existing model, save for the new set of alloy wheels and blackened outside rear view mirrors. The rear profile too remain unchanged, except for the new reflectors on the tailgate that now have an extended portion of the tail-lights. The vehicle also gets two new paint jobs – Radiant Red and Lunar Silver Metallic – which replaces the Carnelian Red Pearl and Alabaster Silver Metallic.

In terms of proportions, the 2018 Honda Jazz facelift remains the same. It measures 3,955mm, 1,694mm and 1,544mm in length, width and height, respectively. The hatchback has a wheelbase of 2,530mm, which ensures spacious cabin to accommodate 5 adults comfortably.

The ground clearance stands at 165mm, which is more than sufficient to tackle Indian road conditions. This premium hatchback offers a boot space of 354-litres and has a fuel tank of 40-litres. It also gets flexi-seats, which can be folded down completely to increase the luggage carrying capacity.

The cabin of the new Jazz comes with subtle changes and new tech features. It is equipped with a new 7.0-inch DIGIPAD touchscreen infotainment system with turn-by-turn navigation. This infotainment system gets a 1.5 GB media memory and it supported by Android Auto and Apple CarPlay, satellite linked navigation and WiFi support for internet. Other changes will include a new centre armrest for the front row, power boot release, push-button start, IR remote control and cruise control. The range-topping variant of the 2018 Jazz facelift will miss out on Magic seats. 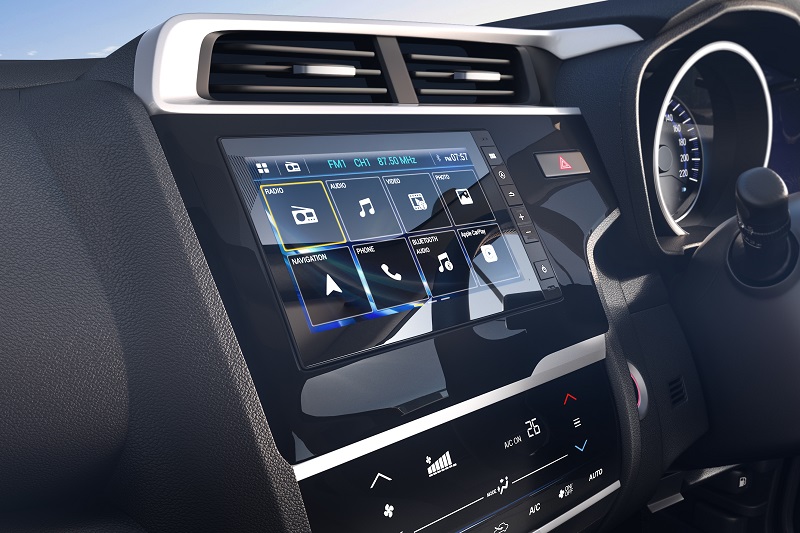 The India-spec Jazz continues to feature the existing set of engines. The gasoline version is equipped with a tried and tested 1.2-litre i-VTEC naturally aspirated engine that churns out a maximum power output of 87bhp at 6,000rpm and a peak torque of 110Nm at 4,800rpm. A five-speed manual gearbox driving power to the front wheels come as standard. It also gets a new CVT automatic gearbox. This gearbox is already available in the new City facelift.

On the flip side, the diesel version of the Jazz hatchback continues to feature the fuel efficient 1.5-litre i-DTEC unit that also powers the City and the Amaze. The oil burner is good for 99bhp of maximum power at 3,600rpm and 200Nm of torque at 1,750rpm. Power is transmitted to the front wheels of the hatchback via a six-speed manual gearbox. Also Read – Honda HRV | New Honda CRV | New Honda Civic

Since the new Jazz will be fitted with the same set of engines, there is not a big change in fuel efficiency numbers. The petrol model is claimed to offer 18.7kmpl and 19kmpl in manual and automatic respectively. On the other hand, the diesel version delivers an impressive fuel efficiency of 27.3kmpl.

The new Jazz facelift is company’s premium hatchback to challenge the likes of Hyundai Elite i20 and Maruti Baleno. This model is equipped with several comfort and convenience features. It is loaded with new upholstery with better fabric and seats are desiged to offer excellent thigh and back support. It offers decent legroom and headroom space for both front and rear passengers’ seat. However, the model misses out on rear air-conditioning vents.

The Jazz hatchback is always known for its spacious cabin and practicality. With subtle design changes and better equipped cabin, the new model could be a viable alternative to other premium hatchbacks in the country. The hatchback offers a large boot space of 354-litres, which can be extended by up to 897-litres by folding the rear seats.