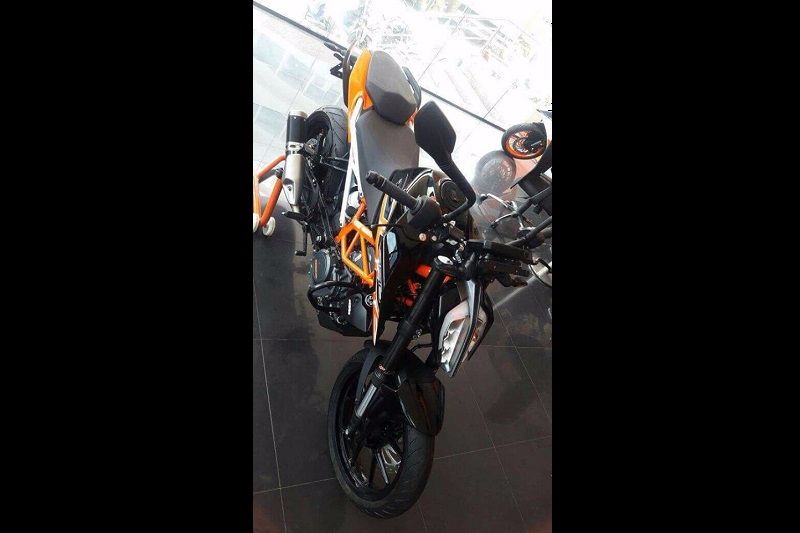 Unlike the regular model that has White ‘Duke’ moniker on the tank, the new Duke 390 Black variant gets orange badge.

The 2017 KTM Duke 390 was launched early this year in a single orange paint scheme. In April 2017, the Austria-based bikemaker introduced a limited White colour edition of the streetfighter at Rs 2.25 lakh (ex-showroom, Delhi). Now, the company might bring in a new Black colour variant of bike. The reason we are saying this is the new Duke 390 Black model has been caught on camera at a dealership in Bangalore. However, there is no clarity whether it was the official unit or a customized one.

The spotted Duke 390 Black variant gets black treatment on the fuel tank and headlamp. In fact, the bike is assembled with black alloy wheels. Unlike the regular model that has White ‘Duke’ badge on the tank, this new variant features orange lettering. While the Black model continues to feature the orange trellis frame and white rear subframe, it misses out on front fork reflectors. At the rear end, the bike gets orange bodywork. Check Out – New KTM Duke 790 – Pictures & Details 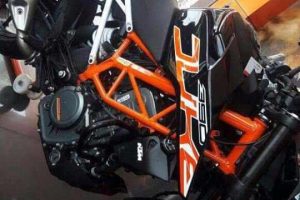 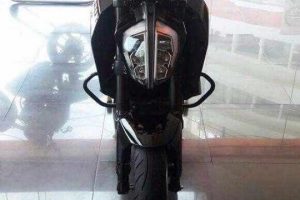 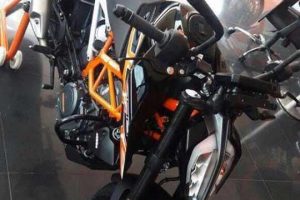 Powering the streetfighter is the same 373.2 single cylinder, liquid-cooled engine with fuel injection technology. This motor is tuned for generating a peak power of 43bhp at 9,000rpm and 37Nm of torque at 7,000rpm. The new Duke 390 is 2% torquier, 9kg heavier than the old model. For performing transmission duties, the bike gets a 6-speed gearbox with a power assisted slipper clutch. Read – KTM 390 Scrambler Is Coming Soon

The bike comes with several first-in-segment features such as ride-by-wire, adjustable levers, LCD instrument console, etc. The new Duke 390 is also the first sub-500cc motorcycle to get smartphone mirroring with Bluetooth connectivity. It allows you to check messages and calls while riding the bike. For 2017 model year, the bike receives new LED headlamp, a new rear monoshock suspension unit and open-cartridge USD front forks. The front brakes are bigger (320mm disc) and have new sintered brake pads.