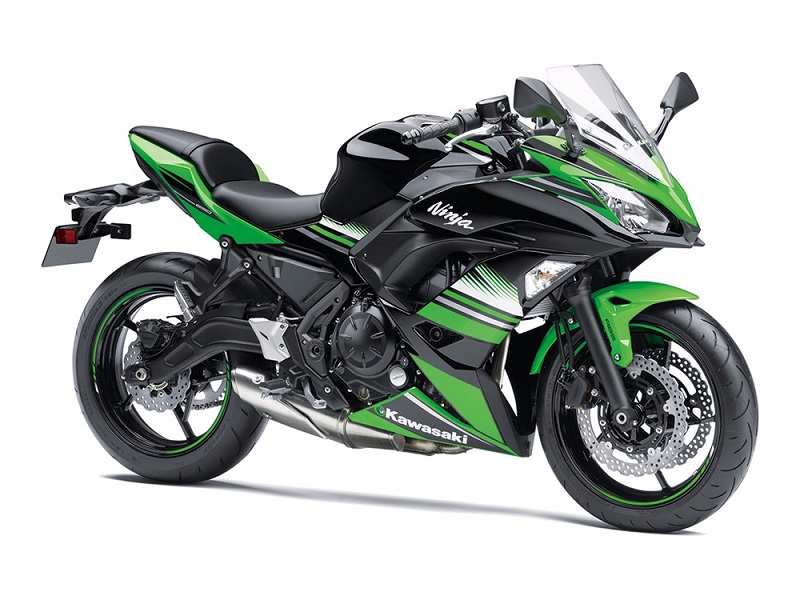 Based on new multi-tubular aluminum chassis, the new Kawasaki Ninja 650 is 19kgs lighter and 6.8% fuel efficient than previous bike.

Kawasaki, the Japanese two-wheeler maker has finally launched the new 2017 Kawasaki Ninja 650 in the Indian market at Rs 5.69 lakh (ex-showroom, Delhi). The bike was launched in foreign markets in 2016. This popular 650cc motorcycle gets both cosmetic and mechanical upgrades. Talking about changes, the vehicle gets new twin-split headlamps, revised fairing design, new rear design and spilt seats with lowered saddle height. It is based on a new multi-tubular aluminum chassis and new swingarm, which makes it 19kg lighter than previous model. Read More – 2017 Kawasaki Ninja ZX-10R Gets New Colours & Graphics

Powering the new Ninja 650 is the same 649cc parallel twin engine, which has been re-tuned to offer improved low- and mid-range torque delivery. This engine is paired to a 6-speed gearbox and gets a slipper clutch. The company has also launched the new Z650 & Z900 in the Indian market.

The new model is priced slightly premium over the current model. The previous generation model was priced at Rs 5.37 lakh; however, the new model cost Rs 5.69 lakh. It is around 32,000 pricier than the previous model.

The 2017 Ninja 650 is powered by the same 649cc, parallel twin-cylinder engine that is capable of producing 71bhp of power at 8,500rpm and 64Nm of torque at 7,000rpm. However, the new engine loses out on 3bhp of power. Power is transmitted to the rear wheels via a 6-speed gearbox. The company claims that the bike has been tuned for “excellent low to mid-range urge and will offer impressive riding experience to those looking for their first middle-weight sports bike.

Japanese automaker claims that the new model is 6.8 per cent more fuel efficient than the outgoing bike. The reduction in weight and addition of slipper clutch (reduces lever pressure during stop/start traffic) plays an important role in improving its fuel efficiency.

The overall profile of the bike is identical to the existing bike, but there are enough changes to keep things fresh in the market. It comes with a sharper fairing design and new twin-split headlamps, which is similar to the Ninja ZX-10R. The bike gets a re-designed rear section that has been made sharper while the underbelly exhaust is the same offered in the outgoing model. It comes with split seats with lowered saddle height.

The bike gets a new multi-tubular aluminium chassis and new swingarm. This new trellis frame is 15kg lighter than the current frame, which turns into improved handling and dynamics. The saddle height has been reduced to 790mm, which improves its riding comfort for short height rider. It also gets new calipers from Nissin and Bosch 9.1 ABS (Anti-Lock Braking System). The 2017 Ninja 650 features new suspension setup with 41mm telescopic forks upfront. The rear suspension features a horizontal linkless system.