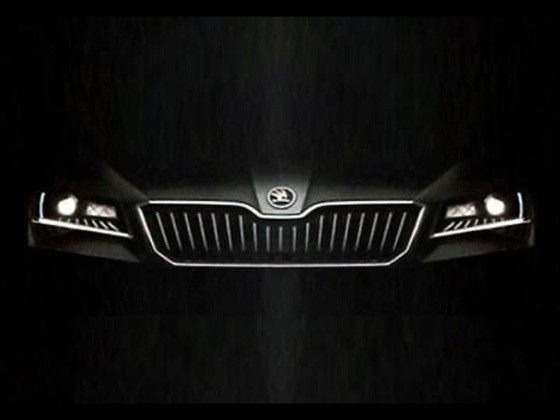 After releasing few camouflaged images, Skoda has now released the teaser images of the next generation Superb sedan. The vehicle is scheduled to be unveiled in February, while the public premiere of the saloon will take place in March 2015. The sales for the updated saloon in European nations will commence by mid-2015. Based on the new Volkswagen Passat, the next generation Skoda Superb is claimed to be slightly longer than the previous model. The increase in wheelbase offers a spacious cabin to it. The company claims it to offer an updated infotainment system, comfortable driving experience, and several new features.

Featuring Skoda’s new design language, the next generation Skoda Superb has an extended hood that overlaps the front grille. Its front fascia features horizontal slats which are flanked by sleeker headlamps with integrated LED daytime running lamps. Going by the teaser, the side profile of the sedan has defined creases and strong shoulder line. Its sloping roofline that merges neatly to tail adds to its sporty character. Features like MirrorLink pairing system and an advanced touch-screen infotainment system, offered on new Fabia, are also likely on offer.

Just like the current model, the 2016 Skoda Superb sedan will get petrol TSI and diesel TDI units. A plug-in hybrid variant is also on cards. The vehicle is expected to hit Indian shores by the early 2016.