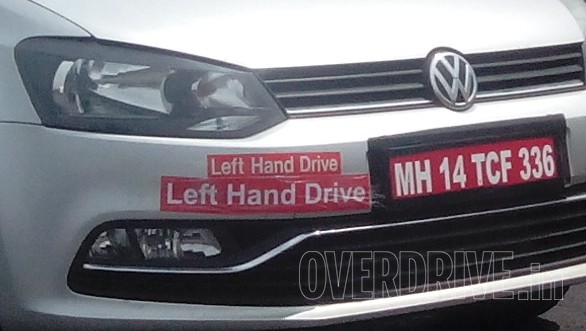 We reported earlier that Volkswagen is all set to launch the 2014 Polo facelift in the Indian car market in July 2014. Now, the vehicle has been spotted during its test rounds on India roads, though, the spotted vehicle was the left-hand-drive export model. The spotted Polo facelift gives us the clear idea about the new design to be offered with the India-spec model. Overdrive managed to click the left-hand drive Polo facelift which shows that the vehicle gets an all-new front bumper. The front bumper now sports a restyled fog lamp assembly and has striking chrome finish all around. It is expected that the chrome treatment will be given to the Volkswagen Vento facelift which is likely to go on sale by festive season. Unveiled at the 2014 Geneva Motor Show, the Polo facelift features the LED headlamps and daytime running lights. However, the spotted vehicle wears the traditional headlamps available on the Polo hatch and Vento in the Indian car market. If media reports to believe, the updated Polo will get the double-barrel headlamps.

The spotted model features the 1.6 badging, however, the Indian spec model will get the current 1.2-litre diesel and turbocharged petrol power plants. Adding to it, the updated Polo will also get the new 1.5-litre diesel engine which will be mated to a new automatic transmission gearbox. The same engine will also power the updated Vento.