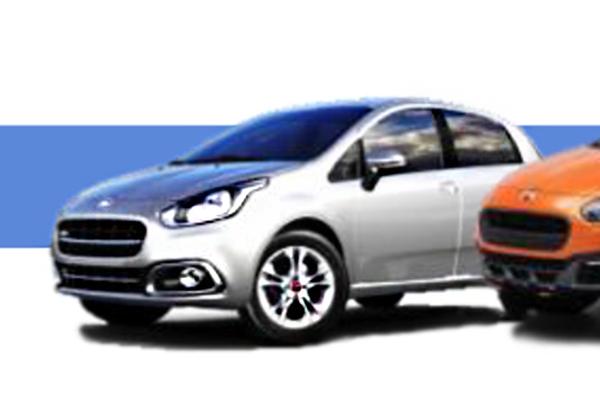 At the 2014 Delhi Motor Show, Fiat announced the launch of 4 cars this year out of which the company has already launched the Linea facelift. The company will launch three more cars this year- Punto facelift, Avventura crossover and Abarth 500. The first product to come will be the updated Punto hatchback, which is likely to go on sale in August, 2014.

The 2014 Fiat Punto has already been spotted several times undergoing testing. Moreover, the company has accidentally revealed the picture of the updated hatchback while it announced its five years plan for the Indian market. Interestingly, the hatchback shares its styling cues with the Avventura crossover concept. The front façade of the car features the rounded-square grille complemented by black, blacked out headlamps.

The lower and wide air dam at the front is heavily sculpted with big, chrome-lined quarter for the trapezoidal shaped fog lamps. It also gets a new set of alloy wheels. Inside, the Punto hatchback shares its interior components with its sedan sibling, Linea. The model features beige and black interior, redone centre console, new upholstery on seats and others. Its top-spec model is equipped with automatic climate control, power steering with audio controls mounted on it, height adjustable driver seat and others.

The Fiat Punto facelift will be offered in two petrol engines and a diesel mill. The gasoline model gets a 1.2-litre and 1.4-litre engines. The oil burner is powered by the tried & trusted 1.3-litre Multi-Jet engine. All the engines are paired to a five-speed manual gearbox.