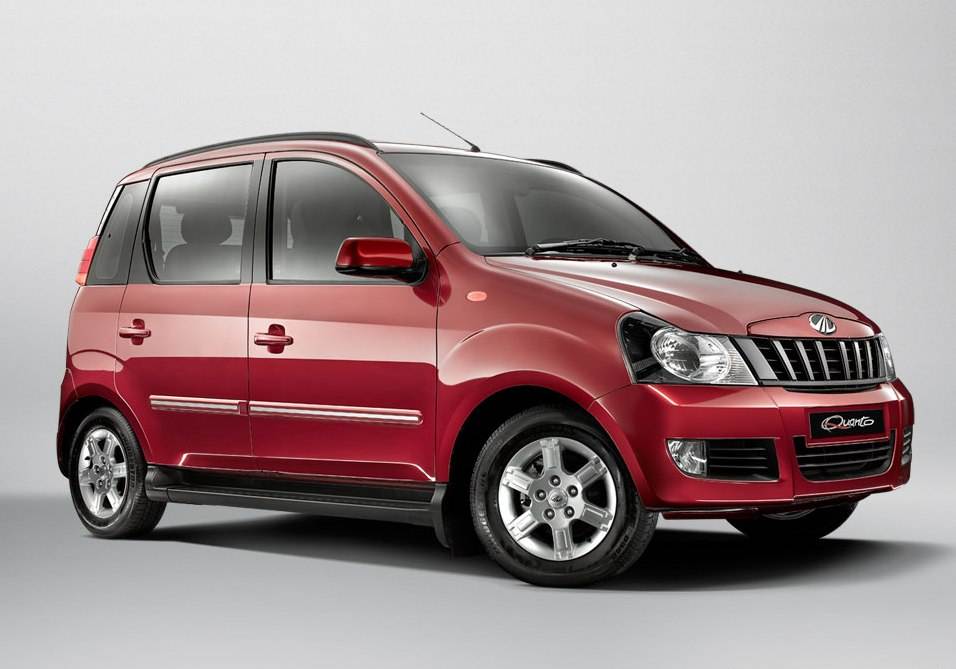 Mahindra Quanto 2016 facelift will be launched at Delhi Auto Expo, which is scheduled for the first week of February, 2016. The vehicle will receive several cosmetic updates along with a new engine and a 5-speed AMT (Automated Manual Transmission) that Mahindra calls Autoshift. Just so you know, the company had unveiled the AMT version of the Quanto at the 2014 Delhi Auto Expo.

The Mahindra Quanto 2016, upon its launch, might be named the ‘Canto’. The vehicle will derive its design inspiration from the Mahindra Genio (facelift) pickup. While the front fascia looks refreshing with new front grille, re-designed bumper and headlights, the rear end looks identical to outgoing model. The interior, too, will be slightly revised with improved material quality. The new Mahindra Quanto model will face a tough competition from the Ford EcoSport. Though, it might also affect the sales of cross-hatchbacks and crossover SUVs like Renault Duster and Nissan Terrano.

The Qunato’s updated model might be launched at the 2016 Delhi Auto Expo in February. The compact SUV might go on sale alongside the Mahindra Genio facelift.

The Quanto facelift is expected come within the price bracket of Rs. 6.5 lakh – Rs. 8 lakh that will make it the most affordable compact SUV of the country.

Here’s Everything You Should Know About Mahindra TUV300

The facelifted Quanto/Canto will feature SUV-like bold stances, and look more refreshing and sportier than the current model. At the front end, the compact SUV will feature TUV300-inspired headlights, a new black metal front grille with silver finish and rectangular floating elements, larger air dams, revised bumper, sporty bonnet, signature Mahindra and chrome surround fog lamps. The vehicle will also receive the Scorpio-inspired hood scoop. Save for the new LED tail-lights and plastic cladding on the tailgate, the rear profile of the vehicle will remain unchanged.

As mentioned above, the interior of the new Quanto will be slightly up-market with improved material quality on centre console and new colour seat fabrics. It will get a new AutoShift unit instead of the conventional gear knob. Though, the entire interior design and equipment will remain unchanged. The top-end model might be exclusively offered with power windows, alloy wheels, air conditioning unit and ABS (anti-lock braking system).

The new Mahindra Qunato 2016 will derive its power from a 1.5-litre, three-cylinder mHawk80 diesel engine that delivers a maximum power of 84bhp at 3,750rpm with 230Nm between 1,500rpm – 2,250rpm. It’s the same powertrain that does duty to the TUV300 compact SUV. Transmitting power to the wheels will be a 5-speed manual gearbox. Mahindra might also introduce a new 5-speed AutoShift transmission, developed in conjunction with UK-based Ricardo, which is likely to be made available on three lower trims – C2, C4 and C6. The suspension unit, too, will be tuned for the better handling and stability.

The new Qunato AMT might be boasted with the regenerative braking system that will make it more fuel efficient than the outgoing model. Coupled with a 5-speed manual transmission, the current version of the SUV returns a fuel efficiency of 13.8kmpl on urban roads and 17.21kmpl on highways. The new AutoShift model is expected to offer a maximum mileage of 15kmpl.