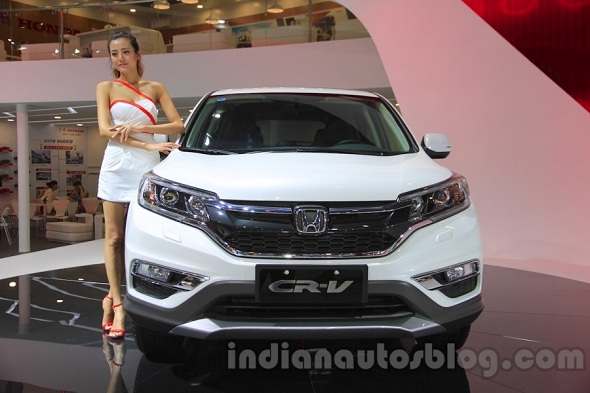 The Japanese carmaker, Honda has unveiled the India-bound CR-V facelift at the 2015 Chengdu Motor Show. The facelifted Honda CR-V is expected to be launched in India by the end of this year. Similar to the existing model, the 2015 Honda CR-V will be imported as a CKD (completely knocked down) unit, and then assembled at the company’s Greater Noida plant. Just so you know, the Honda CR-V facelift made its global debut at the 2015 Auto Shanghai.

The facelifted CR-V receives noticeable cosmetic updates, and a few additional features. Though, there are no mechanical changes made to the it. On the exterior, the updated model features new ‘Solid Wing Face’ grille, revised headlamp cluster with integrated LED daytime running lights, a new chrome appliqué, re-designed front and rear bumpers, new alloy wheels and LED tail-lights skid guards.

From inside, the updated model looks largely similar to the old one. Though, it gets a new 7-inch multimedia infotainment system with HDMI (high-definition multimedia interface) and Bluetooth telephony, a three-angle reverse parking camera and lane assist system. It will also get an internet radio, optional satellite navigation, display for journey time and fuel efficiency, a sliding arm rest between the front seats and dashboard with chrome treatment.

Though, the 2.4-litre power-unit will be now mated to a CVT (continues variable transmission) instead of the existing 5-speed automatic gearbox. While the 2WD drive system will come as standard feature, the 4WD drivetrain system will be an optional offering. Here’s Everything You Should Know About Honda Jazz