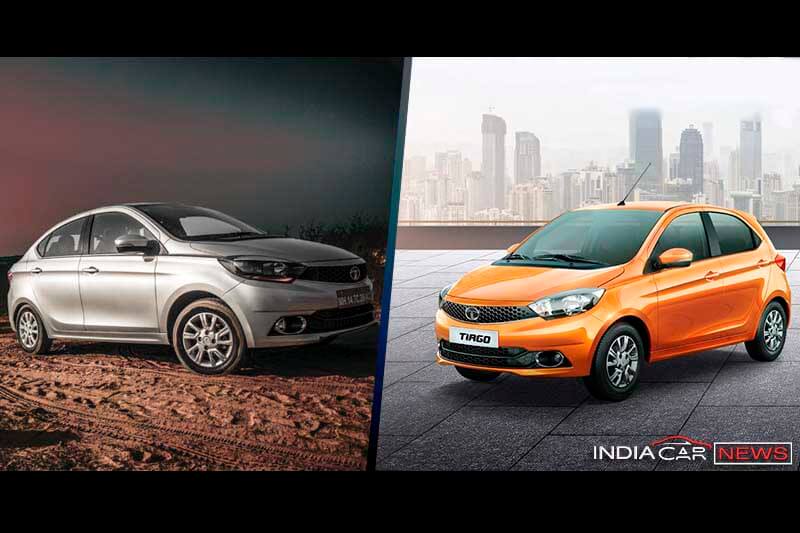 Tata Motors has been on a launch spree since last year with prominent launches in vital segments.  Based on the IMPACT design theme, the new Tata cars are radically different from the previous models. While Tiago was a break through car for Tata Motors, its sedan twin, Tigor raised the bar further. With attributes like aggressive pricing, contemporary looks, frugal engines and feature packed cabin, both the models are one of the best in their respective segments. In this spec-based comparison, we stack up Tigor against its donor sibling to find out how different they are from each other.  Check out Tata Tiago Vs Tata Tigor Price, Specs, Mileage and other details –

-Tata Tiago petrol variants are priced between Rs 3.21 lakh to Rs 5.25 lakh.
-Diesel powered Tiago starts from Rs 4.97 lakh and goes up to Rs 5.64 lakh.
-Tata Tigor undercuts rivals by a substantial margin, the petrol Tigor is priced in the range of Rs 4.59 lakh to Rs 6.04 lakh. Also Read – Tata Tigor Vs Maruti Dzire
-Diesel variants in the Tigor carline are priced from Rs 5.41 lakh to Rs 6.87 lakh (all prices ex-showroom, Delhi).

-The entry-level XB variant only gets an immobilizer.
-Dual front airbags are standard on XZ & XZA variants, while the rest of the variants get it as an optional provision.
-Speed dependent auto door locks are available from XM onwards.
-Rear Defogger & rear parking sensors are offered from XT onwards.
-ABS with EBD & corner stability control is restricted to the XZ & XZA trims.
-Front fog lamps, rear defogger & rear smart wiper with washer come with XZ and XZA variants.

-The base variants only get an engine immobilizer.
-Dual front airbags, rear defogger & seat belt with pretensioners & load limiters are offered from XZ onwards.
-ABS with EBD & corner stability is available from XT onwards.
-Rear view camera comes only with the XZ (O) variant.