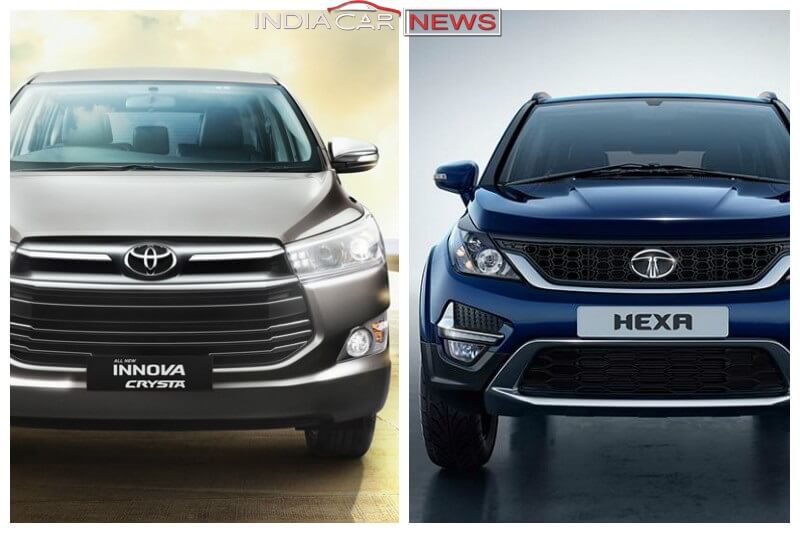 Tata Hexa is the new flagship SUV for the homegrown automaker, going against credible rivals in the utility space including the long-standing Toyota Innova Crysta. Agreed that both the vehicles have a different body style, on one hand Tata Hexa is a premium crossover/SUV and on the other hand Toyota Innova Crysta is a full-sized MPV, yet, regardless of their body styles, both have common attributes.

To begin with, they have a similar size and taking into account the leaked pricing, their positioning it close too (in terms of pricing). This puts both the vehicles in cross hairs and we bring you a spec based comparison between Tata Hexa and Toyota Innova Crysta.

Tata Hexa carline comes with two engine options, the 2.2 litre 4-cylinder VARICOR 400 diesel engine and the 2.2 litre 4-cylinder 320 oil burner. Entry level XE variant in the line-up uses the 2.2 litre, 4-cylinder 320 unit belting out 148bhp at 4000rpm and 320Nm of torque between 1700 to 2700rpm. Higher variants in the range are powered by a 2.2 litre, VARICOR 400 powertrain making 154.2bhp of power at 4000rpm and 400Nm of torque between 1700 to 2700rpm. There are three transmission options – the 5-speed manual, 6-speed manual and 6-speed auto box. The 5-speed manual transmission is paired to the XE trim, whereas the six-speed units will be available with XM and XT variants.

Toyota Innova Crysta comes in two fuel options-petrol and diesel. Diesel Innova Crysta derives power from the 2.4 litre GD VNT inter-cooler oil burner and the 2. 8 litre GD unit. Toyota added a new petrol engine to the carline, the 2.7 litre, 4-cylinder unit that makes 164bhp of power along with 245Nm of torque. The 2.4 litre powertrain develops 145bhp and 343Nm of torque as opposed to the 171bhp and 360Nm churned out by the higher capacity 2.8 litre, oil burner. Transmission duties on the carline are handled by five-speed manual and six-speed automatic units.

As mentioned in the beginning, the two vehicles have a similar size and the dimension measurements of both the UVs validate this aspect. What may surprise you is the length, where Hexa outnumbers Innova. That said Tata Hexa measures 4,780mm as against Toyota Innova Crysta that is 4,735mm long. Tata Hexa again takes lead in terms of width at 1,895mm compared to Innova’s 1,830mm. One facet where Innova drives past Hexa is the height. Toyota Innova measures 1,795mm tall as opposed to Hexa at 1,780mm. Coming to the wheelbase, Tata Hexa has a spacious cabin courtesy the 2,850mm wheelbase, as for Innova it lags behind by 100mm.

Tata Hexa crossover is offered with six and seven seating arrangements. Besides making an effort to enhance visual appeal, Tata has made sure it arms the cabin well for the comfort of occupants. There are some first in segment features as well like the racecar mapping, new ‘Super Drive Modes’ and new generation Electronic Stability Program (ESP). In terms of entertainment, it is benefitted from a touchscreen infotainment system with AUX-in, Bluetooth connectivity, smartphone connectivity and 10 JBL speakers. Additionally, Tata Hexa gets auto climate control, rear AC vents and height adjuster for driver’s seat. There are three add-on kits for customisation-Hexa Tuff kit, Expedition kit and Luxe kit, available at an additional cost.

Going by the prices, Tata Hexa is more affordable with prices starting at Rs 11.99 lakh. As we go up in the line-up, the XM trim gets a tad pricier at 13.85 lakh followed by the XT variant at Rs 16.20 lakh. Compared to the manual, the XMA variant takes a stark jump at 15.05 lakh. Positioned above the manual XT variant is an automatic option – XTA, which is priced at Rs 17.40 lakh. The range topping XT 4WD model is priced at Rs 17.49 lakh. Please note the above mentioned prices are ex-showroom Delhi prices.