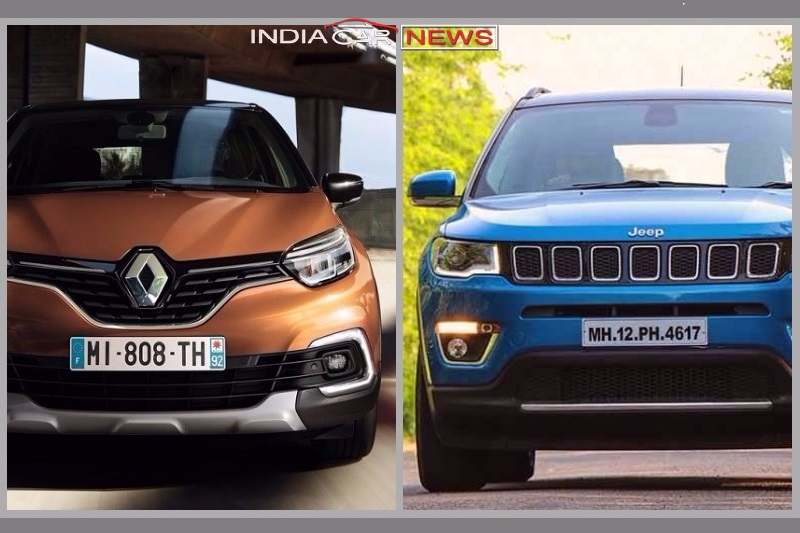 Renault Captur Vs Jeep Compass – Here is a spec based comparison between the two popular premium SUVs.

Renault India has finally added long awaited Captur to its SUV line-up in India. It already had Duster in its product portfolio which was launched back in 2012. Touted to be a premium offering, Captur sits above Duster in the range and competes directly with Hyundai Creta and Mahindra XUV500. While the higher variants in the line-up face-off with Compass’s entry level trims and keeping that in mind we bring you a detailed spec-based comparison between Renault Captur and Jeep Compass.

– The premium SUV from Renault has been priced between Rs 9.99 lakh to Rs 13.88 lakh(ex-showroom, Delhi)

-Loaded with as many as 50 premium features, the entry level variant has been launched at an introductory price of Rs 9.99 lakh across India.

-The fully-loaded, top-spec Platine variant misses out on the petrol trim and comes only with the diesel engine.

-The carline currently gets a 5-speed manual (petrol) and a 6-speed manual (diesel) unit, though Renault may add an AWD system and automatic variants at a later stage.

-Jeep Compass is available in petrol & diesel engines with a choice between 6-speed manual and a 7-speed DSG AT unit.

-Jeep will introduce a 9-speed AT unit on the diesel variants at a later stage.

-In terms of fuel economy, the petrol Captur returns 14-15 km/l and the diesel-powered version delivers similar to Duster between 19-20 km/l.

-The Petrol-powered Jeep Compass returns around 12-14 kmpl. (Please note, final figures are awaited from ARAI for the petrol version).

-The diesel variants in the line-up are rated at 17.1 km/l. Read – Renault Captur Vs Hyundai Creta

-In terms of dimensions, Compass is substantially longer and there is a slight difference in height.

-Both the models have similar width, though Captur sits on a longer wheelbase.

-Renault Captur gets a 7.0-inch touchscreen infotainment system along with other connectivity bits such as media navigation USB, AUX-In, integrated maps and Bluetooth connectivity etc.

-Renault packs in vital safety bits like ABS with EBD, ISOFIX system and seat belts with pretensioners as standard on the carline.

-The SUV was crash tested by Latin NCAP in June 2017 and scored 4-stars for adult protection and 3-stars for child protection.