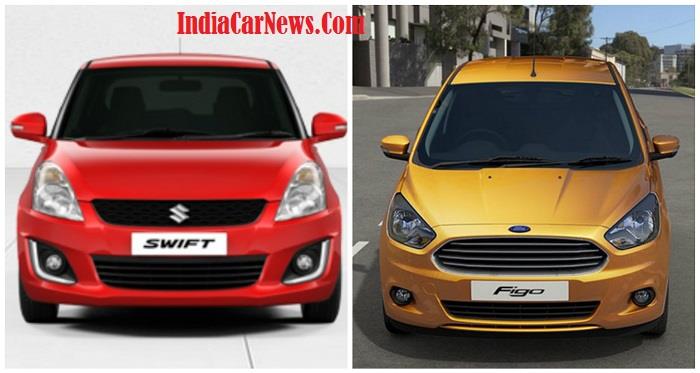 After introducing the highly-anticipated Figo Aspire compact sedan, Ford India has launched the much-awaited new generation Figo hatchback in the country. The new-generation Figo takes its design inspiration from the sedan sibling, and gets more powerful powertrains. The new Ford Figo compete against the already established brands including Maruti Swift, Hyundai Grand i10, Honda Brio and the Tata Bolt. Here we bring you a spec based comparison between the New Model Ford Figo with the segment leader- the Maruti Swift.

The new Maruti Swift is available with two engine options- 1.2-litre K Series petrol and 1.3-litre DDiS diesel engine. While the former is good for 83.1bhp and 115Nm of torque, the oil burner is good for 73.94bhp of power and a peak torque of 190Nm. Both the engines are mated to a five-speed manual transmission.

The new Ford Figo looks largely identical to the Figo Aspire compact sedan. On the front fascia, the car features an Aston Martin-inspired front grille, flanked by a large sweptback headlights, body toned bumper that sports a wider grille and a pair of fog lamps. The side profile is slightly taller and longer than the existing one. The flared wheel arches of the hatchback have been fitted to newly styled petal shape alloy wheels. At the rear end, the hatchback gets a raked windshield, bold line connecting taillight enclosure and a well-designed rear bumper.

Inside the car, the new Ford Figo gets an all-black scheme. The steering wheel, centre console, door panels and seats get black theme. There is silver accents on door armrests and chrome surrounded air-conditioning vents. The range-topping variant gets a 4.2-inch SYNC 2.0 Multimedia Infotainment system and automatic climate control. Features like instrument cluster, switchgear, AC vents, steering wheel and others have directly lifted from the Figo Aspire.