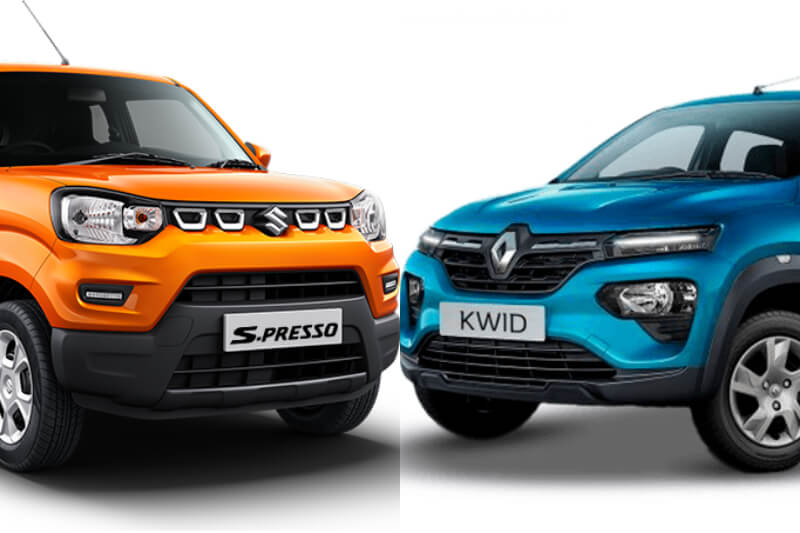 Maruti Suzuki has launched an all-new entry-level car – the Maruti S-Presso. What’s interesting is that Renault India introduced the 2019 Renault Kwid facelift to counter the recently launched and its new key competitor – the S-Presso. While the Kwid facelift is available with 2 engine options – 0.8-litre petrol and 1.0-litre petrol, the S-Presso is offered in the single 1.0-litre petrol engine. Here we bring you a specifications, features and price comparison between the top-end variants of the Maruti S-Presso and the Renault Kwid facelift

The 2019 Renault Kwid is available with 2 engine options – a 0.8-litre 3-cylinder petrol and a 1.0-litre SCe petrol. The 1.0L engine is capable of producing 67bhp of power at 5,500rpm and a peak torque of 91Nm at 4,250rom. This is a BS4 compliant engine and will shift to BS6 in early next year. Transmission choices include a 5-speed manual and an AMT unit.

The Maruti S-Presso on the other hand gets a BS6 compliant 1.0-litre petrol engine, which will also power the Celerio and the Wagon R. This powertrain produces 67bhp at 5,500rpm and 90Nm of torque at 3,500rpm. A five-speed manual is available as standard, while the AMT unit comes with top-end variants.

Both cars are equipped with driver-side airbag, ABS with EBD, rear parking sensors, a seat-belt reminder and speed alert will come as standard. The S-Presso and Kwid facelift will meet the new crash test and pedestrian safety norms. The top-spec S-Presso gets two airbags as standard, while the Kwid 1.0 gets passenger side airbag as an optional. However, the Maruti’s entry-level model misses out reverse parking camera.

Dimensionally, the Maruti S-Presso is 114mm shorter, 59mm narrower and 86mm taller. In fact, the wheelbase and ground clearance are 20mm and 4mm less than the Kwid respectively. Dimensionally, the S-Presso is 3,565mm in length, 1,520mm in width and 1,564mm in height. The mini SUV comes with a wheelbase of 2,380mm and a ground clearance of 180mm. The entry-level and top-spec trims of Maruti Suzuki’s new mini SUV weigh 726kg and 763kg respectively. The Renault Kwid that carries a kerb weight of 699kg, is 27kg lighter than the S-Presso.