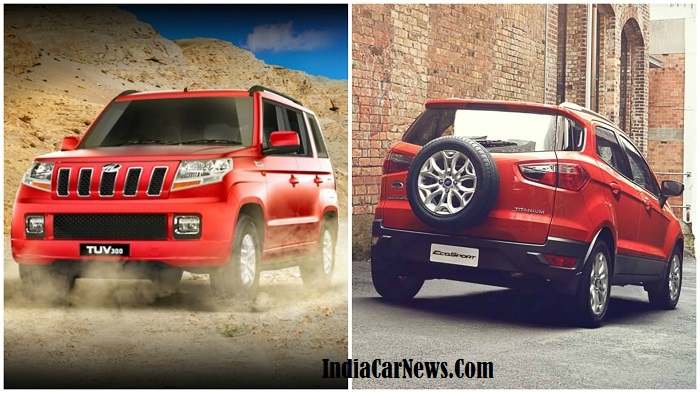 Mahindra & Mahindra, the homegrown automaker has entered the growing compact SUV segment with its much-awaited Mahindra TUV300. It directly rivals the already established and current segment leader Ford EcoSport. Interestingly, the TUV300 is being made available in seven-seat configuration (5 + 2) with two single jumper seats behind the second row. Here is our brief comparison between the Mahindra TUV 300 and the Ford EcoSport. We hope the comparison will help you pick the right car between the two.

The Ford EcoSport is based on the Kinetic design philosophy. It is equipped with hexagonal grille with chrome treatment, flanked by sleek contemporary headlamps. The side profile of the SUV is simple, featuring strong belt line, ORVMs with integrated turn indicators and flared wheel arches. The rear overhang is short in size, while the rear gets tailgate-mounted spare wheel.

Talking about the Mahindra TUV300, the SUV looks pretty decent thanks to its rugged feel. The front fascia sports a vertical chrome slats grille, static bending headlamps, flat bonnet, black bumper and rectangular fog lamps. At the rear, the sub-4 metre SUV gets the rear-mounted spare wheel and vertical tail lamps. The side profile looks plain and flaunts boxy design. There is a prominent character line, roof rails and blackened B and D Pillars, which add to its sporty profile.

The interiors of the EcoSport are directly sourced from the Fiesta sedan. The overall layout of buttons, instrument cluster and the electric mirror adjustment, and the climate control dials are largely identical to the previous model. The interior theme is all-black with silver inserts. The front two seats offer decent legroom, headroom and shoulder space, but the rear bench is slightly cramped for three adult passengers.

On the other hand, the Mahindra TUV300 SUV is available in seven-seats layout with two single jumper seats behind the second row. The compact SUV offers best-in-class headroom and legroom. The vehicle gets three-spoke steering wheel that features audio system controls and contoured palm grips. The instrument cluster gets a Multi information display (MID) in the middle, a speedometer on right and a tachometer on the left. It is equipped with two large dials with chrome highlights that add more to its sporty appeal.

Powering the Mahindra TUV300 is an mHawk architecture based engine- called mHawk80- with Micro Hybrid technology, a start/stop option and Eco Mode system. This engine churns out 84bhp of power and 230Nm of torque. Power is transmitted to the front wheels via a five-speed manual and an autoSHIFT AMT (automated manual transmission) gearbox.

On the other hand, the Ford EcoSport gets a 1.5-litre TDCi diesel engine that produces 87.7bhp of power and 204Nm of torque. This engine is paired to a five-speed manual gearbox which sends the power to front wheels.