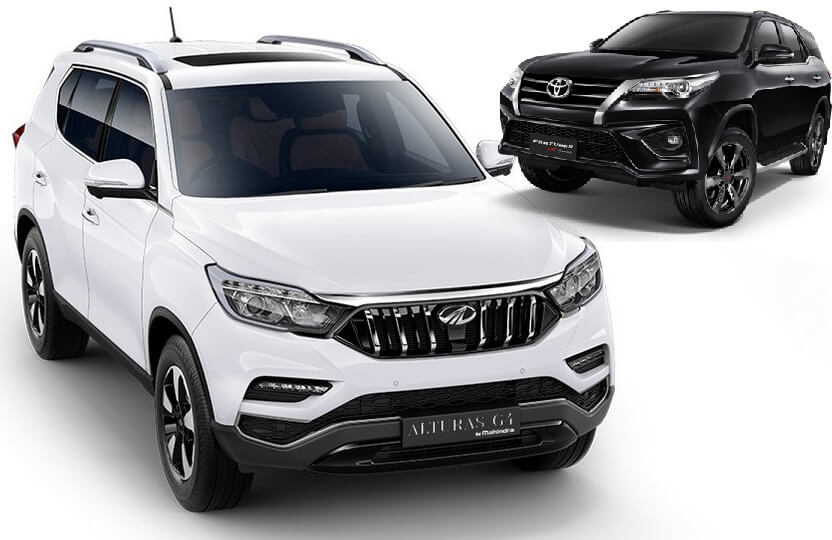 Here is a specifications based comparison between the Mahindra Alturas and Toyota Fortuner.

The long-awaited Mahindra’s 7-seater premium SUV based on the global Rexton has officially been launched in India. Called Mahindra Alturas, the SUV is the company’s new flagship and the most expensive model in India. This SUV rivals the likes of Toyota Fortuner and Ford Endeavour. Here we bring you a specifications based comparison between the Alturas and Fortuner. Check out Mahindra Alturas Vs Toyota Fortuner price, specifications, features and other details –

– The segment-leader Toyota Fortuner is available in both petrol and diesel guise. The petrol version is priced between Rs 27.23 lakh and Rs 28.83 lakh.

– The Alturas is Mahindra’s most expensive SUV, which is based on the global SsangYong Rexton. With decent local components, the Alturas undercuts the prices of the Fortuner.

– Powering the Fortuner is a 2.8-litre 4-cylinder turbo-diesel engine that is capable of producing 174bhp of power and 450Nm of torque. Transmission options include a 6-speed manual and a 6-speed automatic gearbox. Both rear-wheel-drive and all-wheel-drive layouts will be on offer.

– The Alturas is only available in diesel avatar. It is powered by a 2.2-litre, 4-cylinder turbocharged diesel engine that also powers the global Rexton.

– This turbocharged unit is capable of producing 180.5bhp of power at 4,000rpm and 420Nm of torque between 1,600rpm and 2,600rpm. Transmission duties are carried out by a 7-speed automatic gearbox sourced from Mercedes-Benz. It is being offered in both the 4WD and the RWD system. Read – Mahindra Alturas – 5 Facts To Know

The Toyota Fortuner diesel MT and AT returns an ARAI certified mileage of 14.4kmpl and 12.9kmpl respectively. Mahindra hasn’t revealed the fuel efficiency of the Alturas. We expect this model to deliver somewhere round 15kmpl.

– The Mahindra’s 7-seater SUV is bigger in size compared to the Toyota Fortuner. It is 55mm longer and 105mm wider, though the Fortuner is 35mm taller. In fact, the wheelbase is 95mm more than the segment leader, which should translate into more cabin.

– Mahindra is leaving no stone unturned to make this upcoming flagship SUV an instant hit in India. Positioning against the Fortuner, the Alturas will offer several high-end comfort and convenience features. While the Alturas will ride on 20-inch alloy wheels, the Fortuner comes with 18-inch alloys. Moreover, the SUV will have electric sunroof which is missing in the Fortuner.