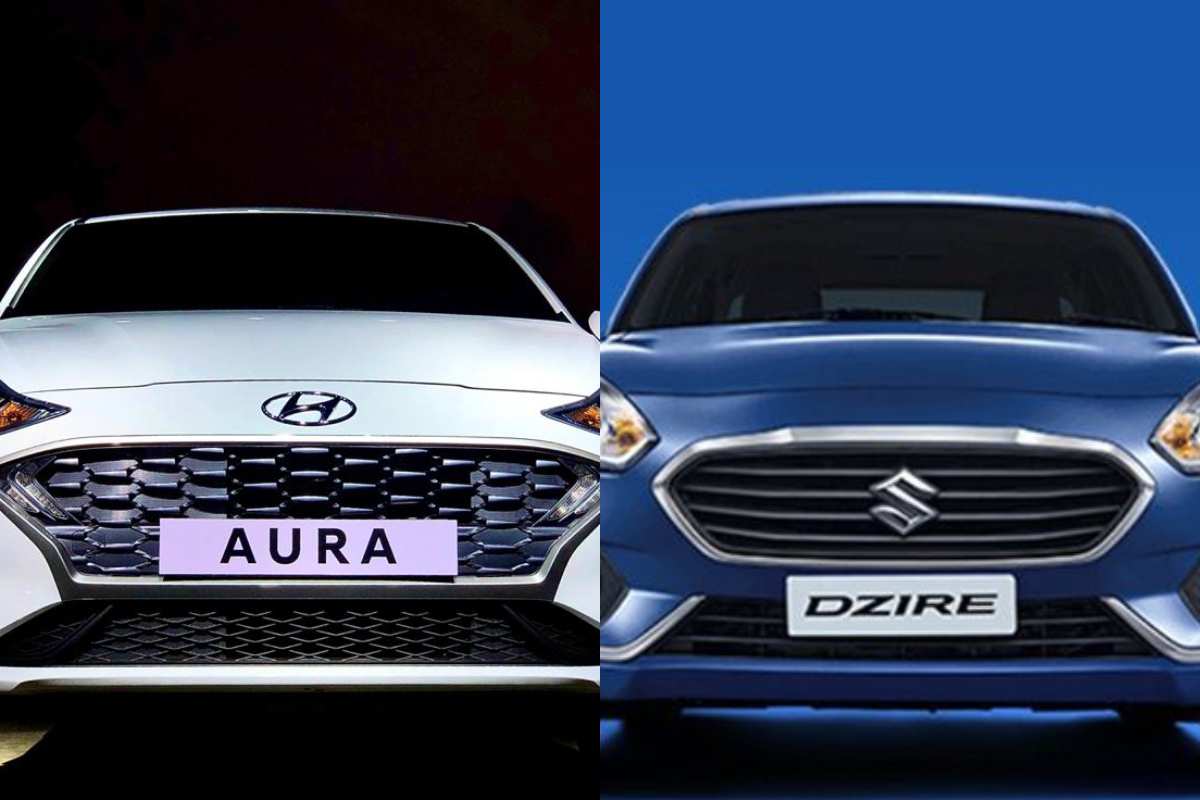 Maruti Suzuki Dzire has been leading the compact sedan segment for the past Decade. The company had delivered over 1.2 lakh units of the compact sedan in the period of April-November 2019. And, more than 20 lakh units of the Dzire have been sold since its launch in India. However, things could change as Hyundai has launched its all-new Aura sub-4 meter sedan. It comes with several segment-leading features and bold design. Here is a specifications based comparison between the Hyundai Aura and the segment-leader Maruti Suzuki Dzire .

Hyundai Aura is available with 3 BSVI compliant engines including a 1.2-litre, 4-cylinder naturally aspirated petrol, a 1.2-litre, 4-cylinder diesel and a 1.0-litre, 3-cylinder turbocharged petrol. The 1.2L petrol engine is capable of producing 81bhp and 114Nm of torque, while the oil burner is good for 74bhp and 190Nm. The turbocharged petrol engine churns out 99bhp of power and 172Nm of torque. A 5-speed manual gearbox driving the power to the front wheels comes as standard, while a 5-speed AMT unit is offered with 1.2L petrol and diesel engine options.

Maruti Suzuki Dzire is available with 2 engine options – a BSVI compliant 1.2-litre, K12 VVT petrol and a BS4 compliant 1.3-litre, DDiS diesel. However, the diesel version of the sedan will be discontinued post April 2020. The gasoline engine is capable of producing 83bhp and 113Nm of torque. Transmission choices include a 5-speed manual and an AMT unit.

The Aura sub-4 meter sedan targets the urban passenger buyers, while the existing Xcent sedan remains on sale for the fleet operators. The front styling remains similar to the Grand i10 Nios. It features a black honeycomb mesh grille, which is flanked by boomerang daytime running lights. The biggest change is made at the rear profile, which now has elongated boot with uniquely styled sharp LED tail-lamp. Other design highlights include sporty bumper, sloping roofline and blacked-out C-pillar.

The Maruti Dzire is one of the smartest and well-proportionate compact sedans currently on sale in India. It features the large hexagonal grille, projector headlamps with LED daytime running lights, sloping roofline, sculpted bonnet and angular front face. At the back, the sedan gets fresh styling with wraparound tail-lamps and sporty bumper.

The sub-4 meter sedan shares its interior with the Grand i10 Nios. It features dual-tone black and beige interior scheme, which is different from the hatchback sibling. It sports an 8-inch touchscreen infotainment system with Android Auto and Apple CarPlay. The Hyundai Aura comes equipped with a wide range of premium features like Arkamys sound technology, wireless charging, automatic climate control, multi-functional steering wheel, etc.