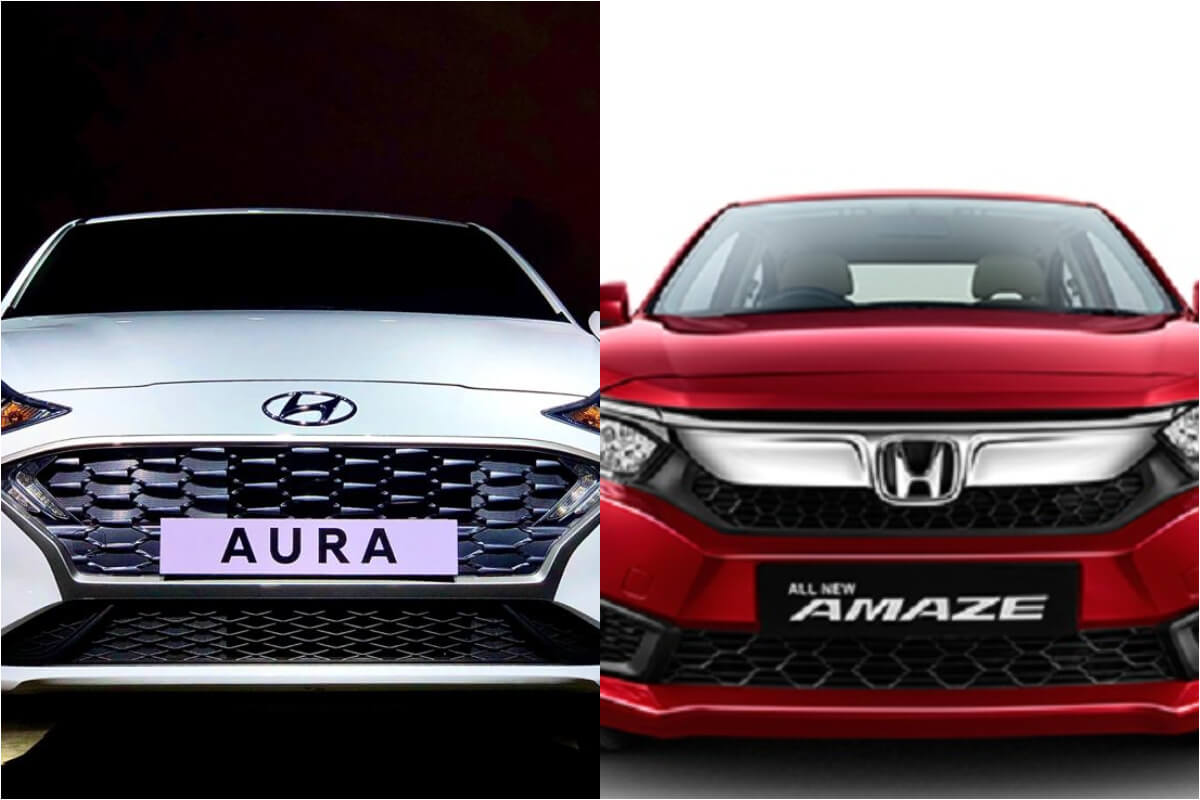 Despite rising demand for SUVs, the compact sedan segment still remains popular choice as a first family car among Indian buyers. The compact sedan is currently dominated by Maruti Dzire, though Honda’s Amaze is also doing pretty decent numbers. Now, the competition gets fierce as Hyundai has launched the Aura sub-4 meter sedan, which rivals the Maruti Dzire, Honda Amaze and the Ford Aspire. Here is a specifications based comparison between the new Hyundai Aura and Honda Amaze .

The Hyundai Aura is available in 3 BS6 compliant engine options – a 1.2-litre, 4-cylinder petrol, a 1.2-litre, 4-cylinder diesel and a 1.0-litre, 3-cylinder turbocharged petrol. The naturally aspirated petrol engine is good for 81bhp and 114Nm of torque, while the diesel engine produces 74bhp and 190Nm of torque. The turbo petrol engine is capable of producing 99bhp and 172Nm of torque. A 5-speed manual gearbox driving the power to the front wheels come as standard, while AMT unit is offered with the 1.2L petrol and diesel engines.

The Honda Amaze is available with 2 engine options – a 1.2-litre, 4-cylinder petrol and a 1.5-litre 4-cylinder diesel. While the former is good for 87bhp and 109Nm, the oil burner produces 99bhp and 200Nm of torque. Both engine comes with manual as well as CVT automatic option. Clearly, the diesel Amaze is significantly more powerful than the Hyundai Aura diesel.

The Aura sub-4 meter sedan is available with 2 petrol engines – 1.2L naturally aspirated and a 1.0L 3-cylinder turbocharged. Both engines are claimed to return an ARAI certified fuel economy of 20.5kmpl. However, the 1.2L AMT version delivers 20.10kmpl. The diesel version is also available in manual and AMT options returning 25.35kmpl and 25.40kmpl respectively.

The Honda Amaze is one of the most fuel efficient cars currently on sale in India. The diesel model is claimed to return an ARAI fuel economy of 27.4kmpl, while the diesel CVT unit offers 23.8kmpl of mileage. The petrol manual and CVT claimed to deliver 19.5kmpl and 19kmpl respectively.

The Hyundai Aura sedan replaces the Xcent sedan in the passenger category, though the later will remain on sale for the fleet operators. The design of the Aura seems largely identical to the Grand i10 Nios, featuring familiar front with a black honeycomb mesh grille and twin boomerang daytime running lights. At the back, the Aura sedan gets a sporty bumper, sloping roofline, blacked-out C-pillar and uniquely styled sharp LED tail-lamp design.

In terms of styling, the Honda Amaze is one of the best-looking compact sedans in our market. The sedan shares styling cues from the new Civic and the Accord. It features an elongated hood, LED headlamps, flat front end, chromed grille, front fog lamps and sporty bumper. At the back, the sedan gets fresh styling with more flattish bumper and wraparound tail-lamps.

The Hyundai Aura’s interior is directly sourced from the Grand i10 Nios. It comes with dual-tone black and beige interior scheme, which is different from the one offered in the hatchback sibling. The sedan gets an 8-inch touchscreen infotainment system with Android Auto and Apple CarPlay. Other features include Arkamys sound technology, multi-functional steering wheel, wireless charging, automatic climate control, etc.

The cabin of the Honda Amaze is designed on the brand’s Man Maximum Machine Minimum philosophy, offering segment-leading space for both front and rear occupants. Some of the features are shared with the City sedan including air-conditioning unit. The sedan gets automatic climate control, engine start/stop system, multi-functional steering wheel, 7-inch touchscreen infotainment system with Android Auto and Apple CarPlay.